Vhudi Mamphwe is one of the artistes auditioning for the 16th edition of the reality television show Idols SA.

A mechanical engineering student, the songster traced his earliest attempt at singing to grade 6. His appearance on the Idols SA circuit was his first on a reality television show. According to the 20-year-old, who is from the Mulenzhe area of Limpopo, he auditioned for the show because he wanted to explore his singing talent.

At the outset, he said he was pretty nervous, but his nerves calmed down a bit when one of the judges (Unathi) laughed. With that laugh came confidence for Vhudi Mamphwe and he was able to deliver a song called “My Yoki Yoki.”

As the songster would explain later, “My Yoki Yoki” was taken from the word “My Yonkinto,” which translates to “My Everything.”

A love song, “My Yoki Yoki” was written for a girl he had a crush on in 2019. Although he didn’t win the girl, she was pleased with the song and gave him a splendid review of it. Other people who got to hear the song spoke positively about it as well.

This motivated Vhudi Mamphwe to take the song to the audition. He also stated that he auditioned with his own song instead of one by another artiste because he wanted to prove that he is a good song writer.

About the appreciation of his gift as a song writer, he is not alone. Unathi thinks highly of his gift as well.  After he sung “My Yoki Yoki,” Unathi had declaimed she enjoyed the song although she didn’t understand a word of it.

She isn’t alone in her rapture, however. South African has literally stood up for Vhudi Mamphwe and his song, pushing it to the top of the trends in the Rainbow Nation. You can check it out below.

It looks like Vhudi Mamphwe’s fame has gone international already. Nigerian popstar Davido has asked the songster to send him a direct message. 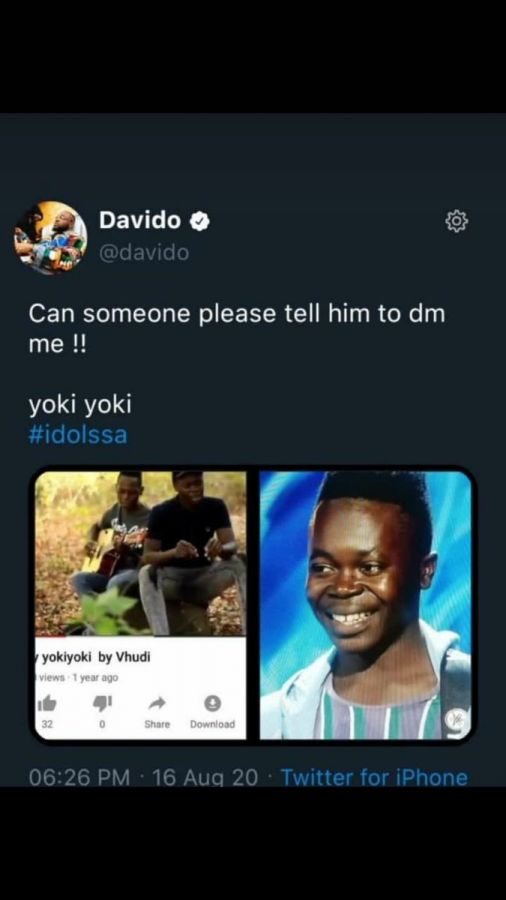 Also, many think the songster will make a great collaborative work with Tresor Riziki, a notable South African musician. They are therefore urging the two to work together. Tresor acknowledged this in a tweet, which you can check out below. 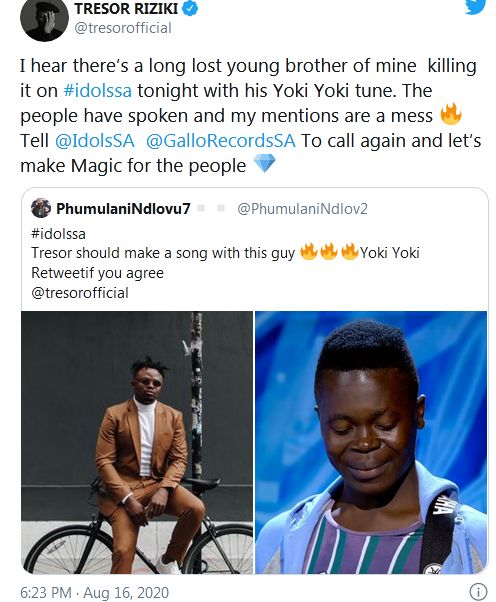 Win or lose, Vhudi Mamphweis already on the way to global fame and fortune.

Amid the outpouring of love and goodwill, Vhudi Mamphwe had taken to Twitter to thank fans for their support. 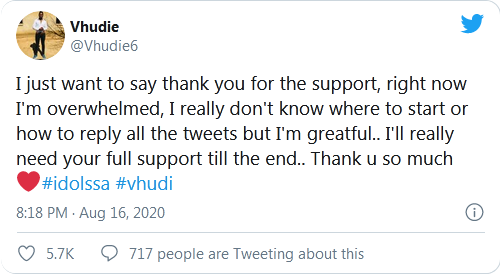 Tags
Vhudi
John Israel A Send an email 18 August 2020
Back to top button
Close
We use cookies on our website to give you the most relevant experience by remembering your preferences and repeat visits. By clicking “Accept All”, you consent to the use of ALL the cookies. However, you may visit "Cookie Settings" to provide a controlled consent.
Cookie SettingsAccept All
Manage Privacy