We certainly did not see this coming. We are sure a lot of Nadia fans didn’t either. All we know is that the rapper has been promoting her hit song “40 Bars” which features Emtee and DJ Capital. We had no idea she had been readying the following up to her project “Nadia Naked”.

A few weeks back, Nakai had some words for the SAMAs after her “Nadia Naked” project did not earn a “Best Hip Hop Album” nomination. She revealed that it would be the last time she would be sending in her music for consideration. This caused a debate on social media, prompting her friend and boss, Cassper Nyovest to weigh in. He stated that her album was better than some of the nominated ones.

Not letting it cramp her style, the SA Hip Hop star has announced the followup to the project. Just out of the blue, she revealed the date of the album’s release to be September 4th, 2020. That’s at midnight, and a week before the release of Cassper’s upcoming album “Any Minute Now”. We are definitely going to be up until the album drops. 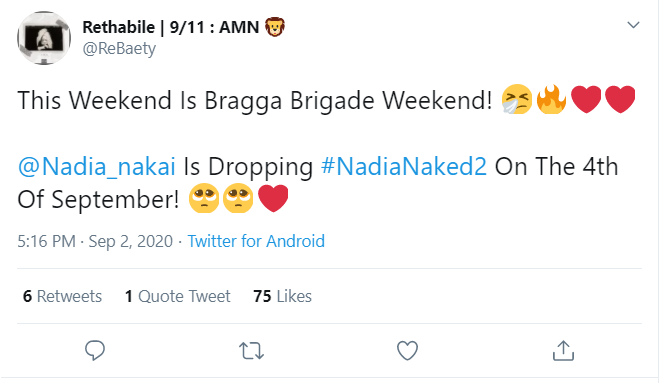