Focalistic is one ambitious musician confident in his musical gift and bold enough to declare his place in the world of African music, going forward. The “Reverse” muso insists in due time he will be the greatest African musician.

He made this known in a recent tweet, which he shared on his Instagram page as well. He bid fans save the tweet for future reference. It takes great confidence in his art and in the letters of the future to declaim this and even ask for records to be kept. 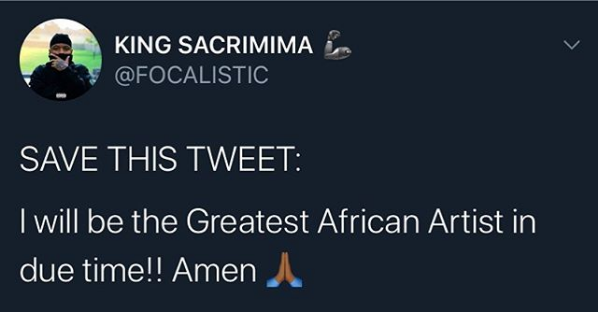 Now, of course, the world is watching, ready to either celebrate him or mock him for “arrogance.” The coming days should reveal a lot about the trajectory of his career in the universe of African music.

Will he eventually make it to the acme of his career and be recognized as the greatest African artiste, or will he end up as one of those pompous figures with delusions of grandeur? We await the verdict of time.

Do you think him the greatest, or perhaps with the potential to be the greatest in the future? You may want to join the conversation by dropping your thoughts in the comment section below.

Tags
Focalistic
John Israel A Send an email 1 July 2020
Back to top button
Close
We use cookies on our website to give you the most relevant experience by remembering your preferences and repeat visits. By clicking “Accept All”, you consent to the use of ALL the cookies. However, you may visit "Cookie Settings" to provide a controlled consent.
Cookie SettingsAccept All
Manage Privacy