Never one to keep silent when he feels slighted, Kanye West has fired shots at The Daily Show host Trevor Noah.

The dram all stayed after Trevor Noah decided to use a segment of his to comment on the ongoing divorce between Kanye West and his estranged wife Kim Kardashian.

In the segment, he noted hos the “Donda” started on a calm romantic note, asking Kim Kardashian to get back to him. But along the line, he’s become belligerent, and he thinks people have to pay attention to this.

He drew special attention to the music video in which Kanye West chopped off an anime of Kim Kardashian’s new lover Pete Davidson’s head and buried him. Kanye West would counter that it was just rap and he had no intention to hurt his adversary. 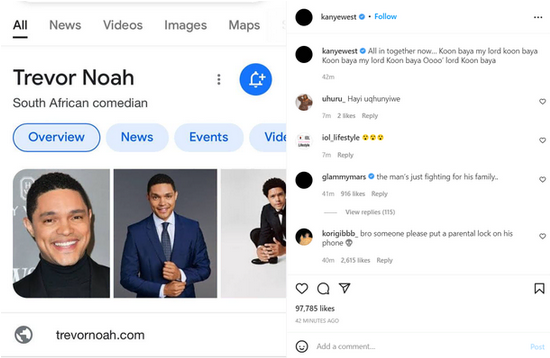 It was thought to be a racial slur, and the reactions from around the world were swift, with many condemning Kanye west for it.

Tags
Kanye West Trevor Noah USA
John Israel A17 March 2022
Back to top button
Close
We use cookies on our website to give you the most relevant experience by remembering your preferences and repeat visits. By clicking “Accept All”, you consent to the use of ALL the cookies. However, you may visit "Cookie Settings" to provide a controlled consent.
Cookie SettingsAccept All
Manage Privacy