There seems to be a Cassper Nyovest and Drip Footwear collab in the works.

Guys, we are freaking out! We aren’t sure yet but there seems to be an upcoming collab between SA Hip Hop star, Cassper Nyovest and Drip footwear. We have no solid info at the moment, but Mufasa’s recent convo with Drip CEO on Twitter says a whole lot.

Lekau Sehoana tweeted at the “Good For That” star on Sunday, February 7, asking if they could have Coffee. Cass replied saying his house wasn’t as big as his but they’d try to accommodate his excellence. Long story short, Lekau said he’d touch down at Mufasa’s mansion and urged him to be in his creative state.

We are ready for this. Weeks back, the “Amademoni” star revealed he’s got something he’s been working on which could make him the first SA Hip Hop billionaire. Hopefully, this is it. 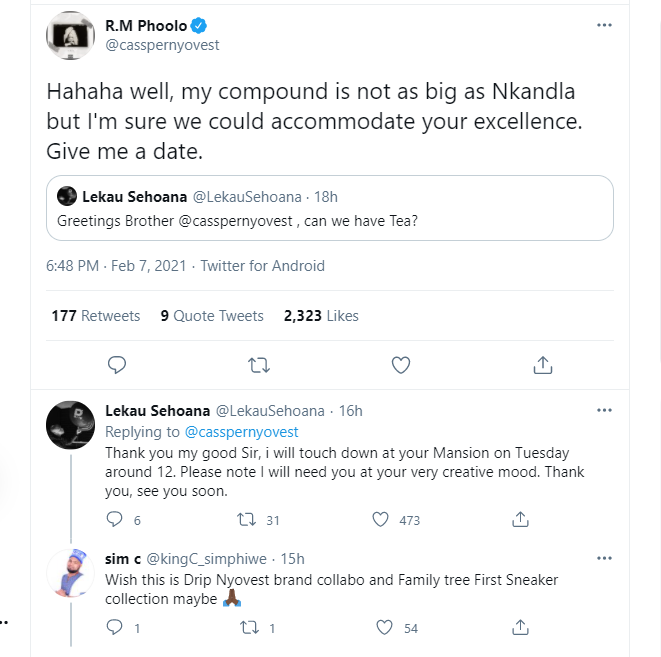 Tags
Cassper Nyovest
John Jabulani Send an email 8 February 2021
Back to top button
Close
We use cookies on our website to give you the most relevant experience by remembering your preferences and repeat visits. By clicking “Accept All”, you consent to the use of ALL the cookies. However, you may visit "Cookie Settings" to provide a controlled consent.
Cookie SettingsAccept All
Manage Privacy