He may have dismissed social media as avenue for serious discussion, but Refiloe Maele Pholo, who goes by the stage name of Cassper Nyovest, does not miss the opportunity for hilarity on social media.

If you have followed him up to this point, you surely would know he is pretty jocund and entertaining, playing with fans via his social media handles. His hilarious side is still active, apparently. At least some fans said that following his response to a Twitter user who was unimpressed by Cassper Nyovest’s devotion to his (the Twitter user’s girlfriend.)

The user, who goes by the Twitter handle @phashake1 asked Cassper Nyovest in a tweet to stop texting his girlfriend. Cassper retweeted with the words “Ithi grootman.” 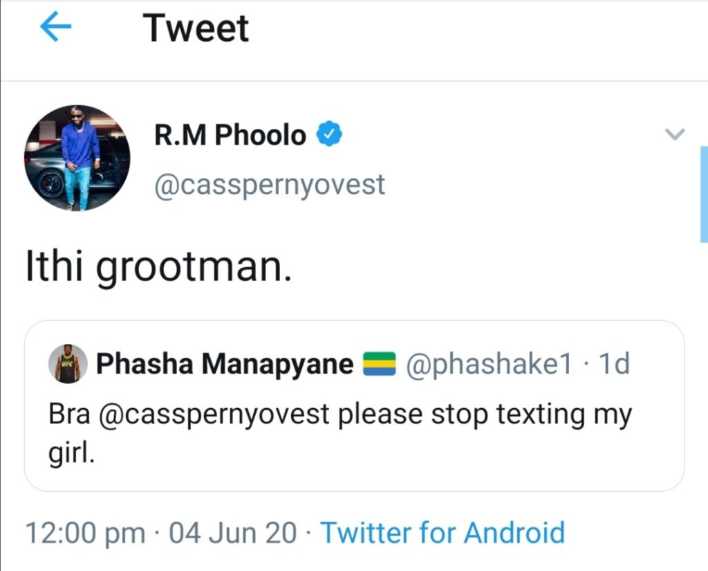 By the way, Cassper Nyovest was recently by the Minister Nathi Mthethwa as a key figure in South African music. He also said he appreciates Cassper Nyovest’s tenacity as a musician.

It cannot be determined it Cassper Nyovest was been hilarious or serious here. Neither him nor the chap who asked him to stay away, mentioned the name of the lady. What do you make of Cassper Nyovest’s reaction?