Emtee and his pal Jayhood are about to get disrespectful with a new song – or so Jayhood said in a recent tweet.

Taking to Twitter exactly 6 hours ago today 28 September, Jayhood stated that he and the Emtee Records boss have got a smash coming up soon. He didn’t indicate the work’s title, or even when fans should expect the work.

The responses to the tweeted indicated fans are already expectant. Some fans dropped the flame emoji, indicating their expectations this would be just another number but a hit from the two musos. You can check out Jayhood’s post below. 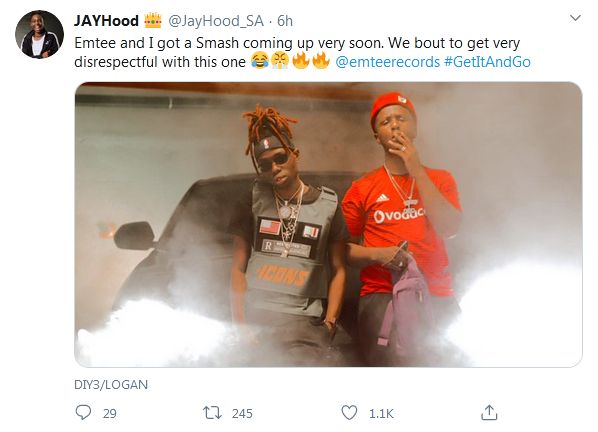 By the way, the pair has worked together previously. One recalls Blaklez had back in September 2019 featured the pair, alongside Tshego and Zakwe, on “DMX Prayer (Remix).”

One fan who was unimpressed by the remix, stated as a response to Jayhood’s tweet his hope the imminent collaborative tune would be better than the remix. He urged jayhood to take things slowly this time.

Whatever it is they are working on, we’ll surely share it with you on release. You may want to follow our social media channels and subscribe to our newsfeed so you don’t miss out on what is imminent.