South African rapper A-Reece recently caused a stir online after he fell on stage during a recent performance. What could have made him fall? That’s one question many have been trying to answer for a while now.

Of course, there is nothing novel about a musician falling on stage, it has happened to other musicians several times in the past. For instance, years back his compatriot Emtee had collapsed on stage while performing.

Most recently the comedian and singer William Last KRM has also fallen on stage while performing. He was taken off the stage and soon recovered.

In the case of A-Reece, his fall elicited mixed reactions. While some tweeps were concerned for his health, some made light of the situation. One Twitter user joked that the rapper fell because he was tired of carrying South African hip-hop on his shoulders. You can check out the clip and the comments below. 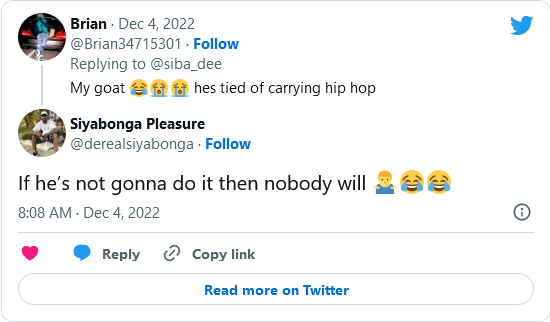 A-Reece has come a long way as a musician. He is considered one of the leading figures in South African rap. When his name popped in the sixth position in MTV Base’s Hottest MCs list this year, many of his fans were outraged, affirming he should be at the very top of the list.

Tags
A-Reece
John Israel A5 December 2022
Back to top button
Close
We use cookies on our website to give you the most relevant experience by remembering your preferences and repeat visits. By clicking “Accept All”, you consent to the use of ALL the cookies. However, you may visit "Cookie Settings" to provide a controlled consent.
Cookie SettingsAccept All
Manage Privacy