Stormzy is the man of the moment, thanks in part to how easily he appeared to have pulled off a musical coup, featuring coach Jose Mourinho in a music video.

It was, of course, an unusual collaboration because Mourinho is a man of the pitch and not of the mic. Expectedly, fans of the musician a d peeps generally were intrigued and hurried to check out the collaboration.

The Portuguese football manager was just as chuffed to collaborate with the songster. Taking to his verified Instagram page, he had shared a slide of him and Stormzy together while noting he had a great time playing a cameo role in the music video. He also acknowledged him for wearing a jewellery brand he appears to endorse. You can check out the post below. 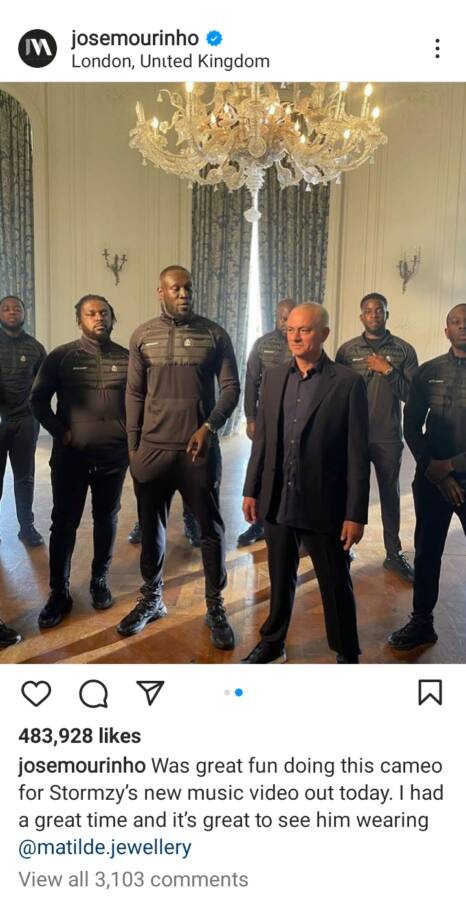 It was the first known time Jose Mourinho would make such an appearance, and fans just couldn’t get enough of the moment. Mourinho stands out on the pitch for his coaching style and his entertaining personality. He is any journalist’s delight any day.

According to some tweeps, having the Portuguese on the song might turn out to be an inspiration for other artists to attempt something similarly ambitious.

Tags
Jose Mourinho Stormzy
John Israel A Send an email 24 September 2022
Back to top button
Close
We use cookies on our website to give you the most relevant experience by remembering your preferences and repeat visits. By clicking “Accept All”, you consent to the use of ALL the cookies. However, you may visit "Cookie Settings" to provide a controlled consent.
Cookie SettingsAccept All
Manage Privacy