The other half of the JazziDisciples music duo, Josiah de Disciple is set to release the second volume of his earlier released mixtape, originally mixed by him.

This is coming after the resounding success of his just released EP tagged “Spirit of Makoela” which you can stream on various music platform.

Josiah De Disciples took to his social media page to announce he will be dropping the project soon. Although he didn’t give a specific date, but the project should be expected anytime soon.

The announcement has gotten his followers all hyped up towards the release of the project, being a great producer that he is, fans are sure to get a masterpiece. 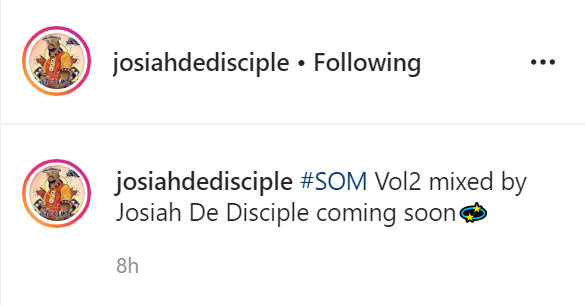 Josiah de Disciple recently took to Instagram to celebrate his woman on her birthday, showing her how much he appreciated her contribution to his music journey.

Tags
Josiah De Disciple
Wuraola Salawu Send an email 20 May 2020
Back to top button
Close
We use cookies on our website to give you the most relevant experience by remembering your preferences and repeat visits. By clicking “Accept All”, you consent to the use of ALL the cookies. However, you may visit "Cookie Settings" to provide a controlled consent.
Cookie SettingsAccept All
Manage Privacy