Singer Kelly Khumalo is in the news again, and it’s not for good. According to multiple sources, Christian, the singer’s son with ex-boyfriend Jub Jub, was expelled from school for bringing marijuana to the premises.

Christian had allegedly stolen the weed from Mthokozisi Yende, a former soccer player and his mother’s rumoured boyfriend.

The news of the expulsion generated mixed reactions on social media, with some tweeps condemning Kelly Khumalo for having failed in her duties as a mother. 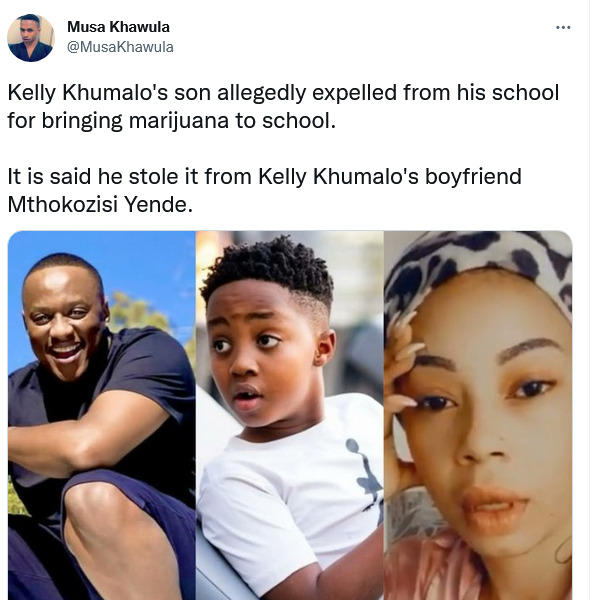 Others encourage Jub Jub to take custody of his son, as Kelly Khumalo has not been living up to her responsibilities as a mother.

Among those who condemned Kelly Khumalo was the controversial YouTuber Slik Talk. He described the “Dance Comigo” songstress as toxic, a “cancer” that corrupts and consumes whatever it comes in contact with.

About the current controversy, Kelly Khumalo has said nothing. And neither has Jub Jub. So all eyes are on the former couple to see how they manage the current crisis.

Jub Jub and Kelly Khumalo have had multiple public tiffs, with the “Ndikhokhele (Remix)” hitmaker accusing Kelly at some point of practising witchcraft. However, he later apologised for those comments and the ones he made about another estranged lover, Amanda Du-Pont.

Tags
Christian Khumalo Jub Jub Kelly Khumalo
John Israel A9 May 2022
Back to top button
Close
We use cookies on our website to give you the most relevant experience by remembering your preferences and repeat visits. By clicking “Accept All”, you consent to the use of ALL the cookies. However, you may visit "Cookie Settings" to provide a controlled consent.
Cookie SettingsAccept All
Manage Privacy