Mzansi rapper K.O is set to release a new song titled “Lucky Star.” The songster informed fans of the imminent a recent tweet.

Taking to Twitter yesterday 2 October 2020, the songster had informed fans that a new chapter begins in his life with the “Lucky Star” track. He gave the release date of the song as 9 October 2020. However, fans can pre-save the song. You can check out his tweet below. 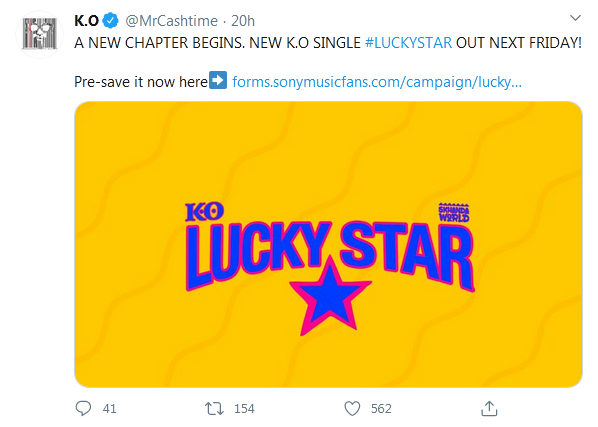 On release, the song would be a follow-up to “Cold Summer,” a collaborative work with Kwesta Roiii and Loki, released by Skhanda World, where K.O. is the god.

With the imminent “Lucky Star” said to herald a new chapter in K.O.’s life, one can only imagine that new milestone he has reached. The hip hop star has been in the music industry for almost two decades and claims to have helped more artistes than any other.

The release date for “Lucky Star” is just six days away. Pretty close, but you need not bother about missing the song on release. We are going to share it here as soon as it is released. So you might want to subscribe to our newsfeed as well as follow our social media channels for updates.