K.O reveals he is already halfway through his next album.

K.O is in album mode and we are loving it. Last year, we all wondered when we would get a new project from him. Replying a fan at the beginning of the year, he revealed that even if the pandemic is still around, he would drop his new album in the second half of the month.

That, of course, had us going crazy. Now, he has revealed he is already halfway into the album. Wow. He revealed this while eplying yet another fan on Twitter. He also stated that he’s also got features lined up, and a new single in the chamber.

This makes us wonder who would be featured on the upcoming album. We hear he’s tapping into that Skhanda Republic (SR1) energy for the album. This is definitely one of the highest anticipated SA Hip Hop albums this year. 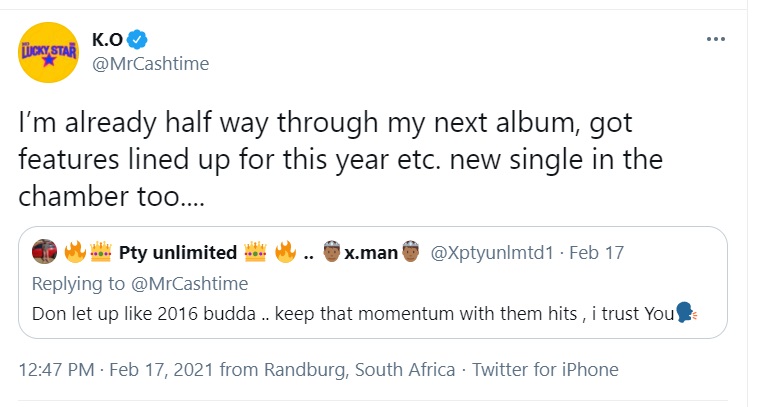 Tags
K.O
John Jabulani Send an email 18 February 2021
Back to top button
Close
We use cookies on our website to give you the most relevant experience by remembering your preferences and repeat visits. By clicking “Accept All”, you consent to the use of ALL the cookies. However, you may visit "Cookie Settings" to provide a controlled consent.
Cookie SettingsAccept All
Manage Privacy