Groups come and go. Depending on what impact they make, fans might want to see them reunite again, and that’s exactly what’s playing out right now.

Cashtime was a South African collective now defunct. It was one of the memorable hip hop hues in South Africa’s bright rap tapestry. No more. However, some fans still look back at the Cashtime days with fond memories.

And now, a tweeter had suggested the collective reuniting again in the tradition of other collectives around the world [named]. But what does “Mr Cashtime” K.O has to say about this cal;l for a reunion?

Replying to the fans who had asked for a Cashtime reunion, the songster had noted the members of the defunct collective can’t force things. However, he also made it clear that Skhanda World, a collective that emerged from the ashes of Skhanda World, would drop something for the music-loving world soon. 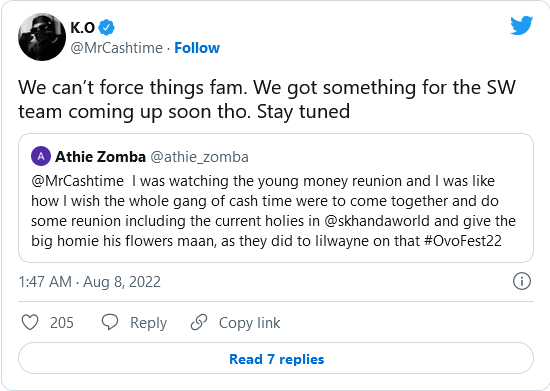 He gave no details about that. He merely asked fans to stay tuned for it. Anyway, as the leading South African music and entertainment blog, you can count on us to share with you all what K.O and his associates should release in the coming days. So, follow us and stay tuned for updates.

Tags
K.O
John Israel A Send an email 9 August 2022
Back to top button
Close
We use cookies on our website to give you the most relevant experience by remembering your preferences and repeat visits. By clicking “Accept All”, you consent to the use of ALL the cookies. However, you may visit "Cookie Settings" to provide a controlled consent.
Cookie SettingsAccept All
Manage Privacy