He came. He saw. He conquered. But there is one field celebrated rapper K.O is yet to conquer, and that’s politics. With the 2024 elections drawing close, some tweeps are already suggesting he takes a shot in the political arena.

In a recent tweet, one of his fans who appeared to be having a countdown to the national elections noted that the current crop of South African politicians are in no way appealing to young people. He then urged K.O to contest for an elective post.

He described the “SETE” hitmaker as the only person who had made the youths happy these past few weeks.

The tweet apparently amused K.O, and he dropped a tears-in eyes laughing emoji. He then clarified that he wasn’t cut for politic, a whole new arena that he has not aptitude for. So, yeah, he would pass. Others are at liberty to make the leap, of course. 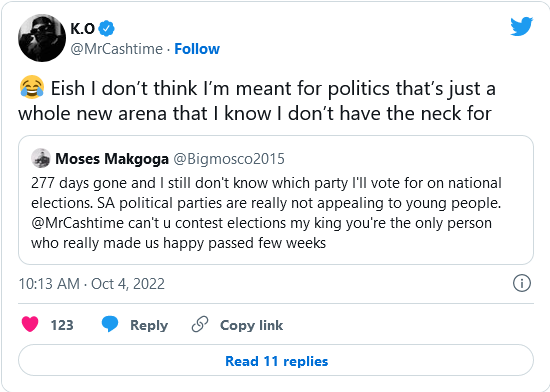 K.O recently released a new project, which has been making waves across South Africa. But “SETE,” one of the songs in then project, appeared to have gotten the greatest reception from fans. They just can’t have enough of it. The songster himself appear surprised by the song’s success.

Tags
K.O
John Israel A Send an email 5 October 2022
Back to top button
Close
We use cookies on our website to give you the most relevant experience by remembering your preferences and repeat visits. By clicking “Accept All”, you consent to the use of ALL the cookies. However, you may visit "Cookie Settings" to provide a controlled consent.
Cookie SettingsAccept All
Manage Privacy