Kanye West takes to Twitter AGAIN to demand an apology from Drake and J. Cole.

Another day, another series of Kanye West tweets just to prove a point, two, or various. Since we have known him, Ye has always shared his opinions on literally everything he wants us to know about.

Not too long ago, his wife Kim, his mother-in-law and Meek Mill were the focus of his tweets. While that caused trouble for his marriage to Kim, he later posted a public apology to her. Fast forward to right now, he’s back to Twitter, and this time, he’s got his eyes set on Drizzy and J. Cole.

Accroding to him, Drake and Cole need to publicly apologise to him. Why? Because he’s Nat Turner and “fighting for us”. His words, not ours. For years now, the Champagne Papi and Ye have been at odds. Their feud was highly publicized when the Canadian star accused West of fueling his feud with Pusha T by telling him personal info about his family.

West’s feud with Cole reportedly began back in 2016 when the “Middle Child” rapper took shots at Kanye on his song “False Prophets”. Well, we all know that apology isn’t happening but we’d love to see what happens. 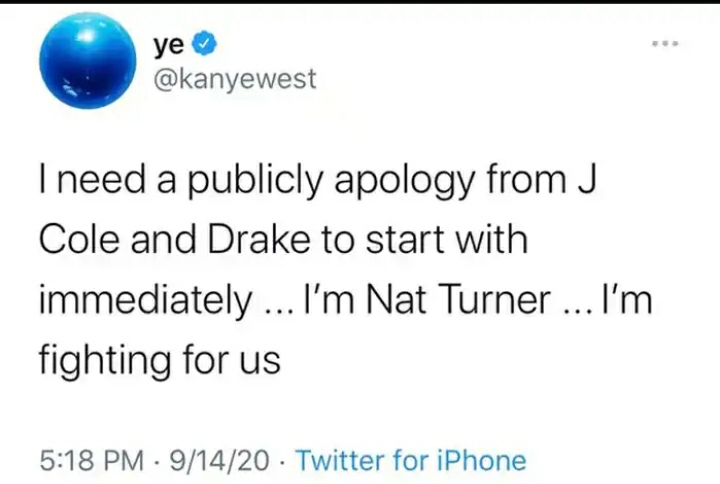 Tags
Drake J. Cole Kanye West
John Jabulani Send an email 16 September 2020
Back to top button
Close
We use cookies on our website to give you the most relevant experience by remembering your preferences and repeat visits. By clicking “Accept All”, you consent to the use of ALL the cookies. However, you may visit "Cookie Settings" to provide a controlled consent.
Cookie SettingsAccept All
Manage Privacy