One man who is clearly chuffed with Kim Kardashian’s split from Pete Davidson is Kanye West, and he’s been rubbing it in the face of the Saturday Night Live host.

Just recently, when news broke out that Kim Kardashian has split with the comedian, Kanye West celebrated it – bizarrely, as usual. In a post on his Instagram page, the “Donda” rapper had declared the comedian dead.

His post read, verbatim: “Skete Davidson dead age 28.” He made the post appear like a news article from the New York Times. “Skete” was a biting reference to the name of his rival to Kim’s heart. It wasn’t the first time he would call Pete “Skete,” however. You can check out the controversial post below. 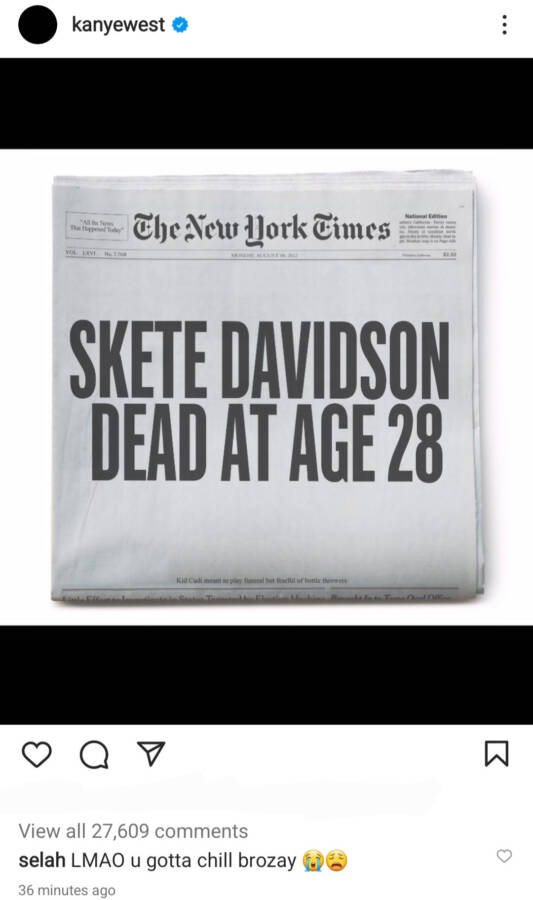 Also, it wasn’t the first time he’d reference the comedian as dead. Previously, in the music video of one of his songs, the musician had shared the morbid moment he was burying an image of the comedian. It echoed around the world, with many people condemning him for it.

The condemnations continue with the latest Instagram post, which he has since deleted. Interestingly, although Kim has split with Pete, sources claim she has no interest in returning to Kanye West.

Tags
Kanye West USA
John Israel A Send an email 9 August 2022
Back to top button
Close
We use cookies on our website to give you the most relevant experience by remembering your preferences and repeat visits. By clicking “Accept All”, you consent to the use of ALL the cookies. However, you may visit "Cookie Settings" to provide a controlled consent.
Cookie SettingsAccept All
Manage Privacy