Katlego Maboe’s ex-wife has slammed claims that the TV personality was found innocent in the case she instituted against him.

Back in 2020, Katlego Maboe’s relationship had been rocked by a cheating scandal, and Monique Muller had also claimed he was abusive to her, filing a protection order against him along the way.

His victory led to massive celebration among his fans, some of whom were still pissed because the TV personality had suffered reputational damage and loss of income as a result of the case against him.

While Monique is upset about the judgment eight now, Katlego Maboe is jubilant. Already, he’s released a statement about his victory, noting that those who had maliciously and falsely accused him during his battle with Monique will have their day in court. 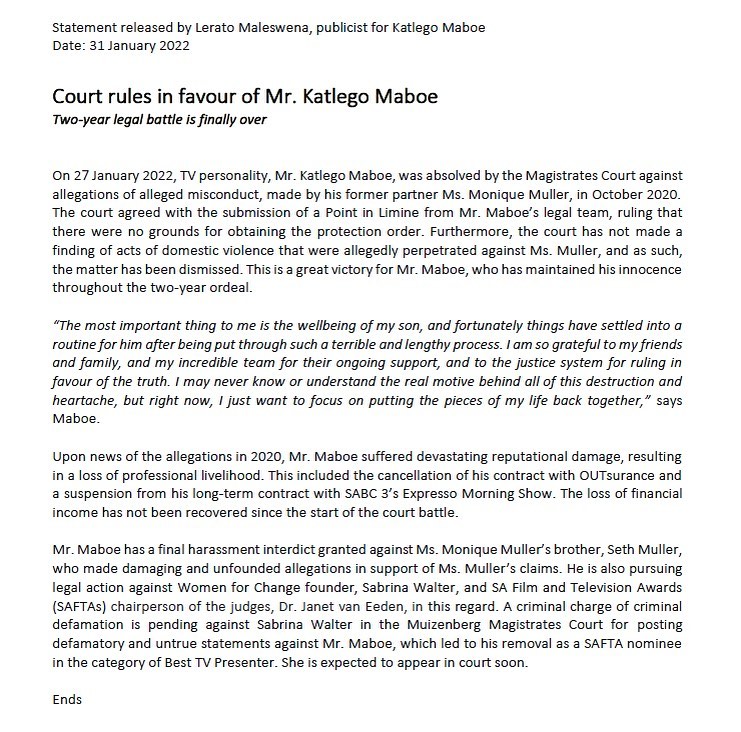 Whether this is just a threat or something he’d pursue in the coming day, remains to be seen. We’ll be here to serve you more details, though.

Tags
Katlego Maboe Monique Muller
John Israel A Send an email 1 February 2022
Back to top button
Close
We use cookies on our website to give you the most relevant experience by remembering your preferences and repeat visits. By clicking “Accept All”, you consent to the use of ALL the cookies. However, you may visit "Cookie Settings" to provide a controlled consent.
Cookie SettingsAccept All
Manage Privacy