“The Voice Of Africa” Kelly Khumalo recently had a time out with besties Somizi and Vusi Nova. The outing was too much for her and she shared this, writing on Instagram “Ya nooo ngiright ngani. (I’m done with ya’ll).” 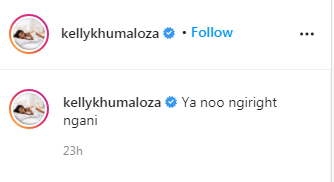 Somizi and Vusi Nova have been having the best time together, leaving many wondering if they are now a couple, especially as Somizi has not been seen with his husband Mohale for some time. Also, Mohale has since ditched the ring he wore when he was Somizi’s husband.

Anyway, after a couple of outings together, including a vacation, Somizi and Vusi Nova decided to spice things up a bit by bringing Kelly Khumalo along. The three had a wonderful time together.

It was the first time Kelly Khumalo had joined the two on a trip, and it was obvious she enjoyed every minute of it. Her Instagram post gave that away.

By the way, Vusi Nova has been severely criticized because of his relationship with Somizi. Some think him gay because he’s not married and is most times to be found in the company of Somizi, who is openly gay.

In reply to gay rumours, Vusi would state that Somizi is an old friend and an inspiration.