At last, Khanyi Mbau has reacted to claims that her daughter Cannes is pregnant.

Rumors that Cannes is pregnant started flying across Mzansi after a clip of the Mbau family together was shared on social media, from Twitter to Instagram.

In the said clip, Khanyi Mbau’s teenage daughter was observed to be somewhat fidgety or rather camera shy and trying to shield her stomach from the camera. The clip had gone viral near instantly.

In a post to Instagram, Khanyi Mbau had addressed the pregnancy rumors, dismissing everything as completely untrue. In fact, she was miffed that people should think her daughter was pregnant in the first place.

People may hate her all they like and abuse her, too, but what she wouldn’t tolerate, according to her, is people making fun of he daughter, whom she describes as just a child. 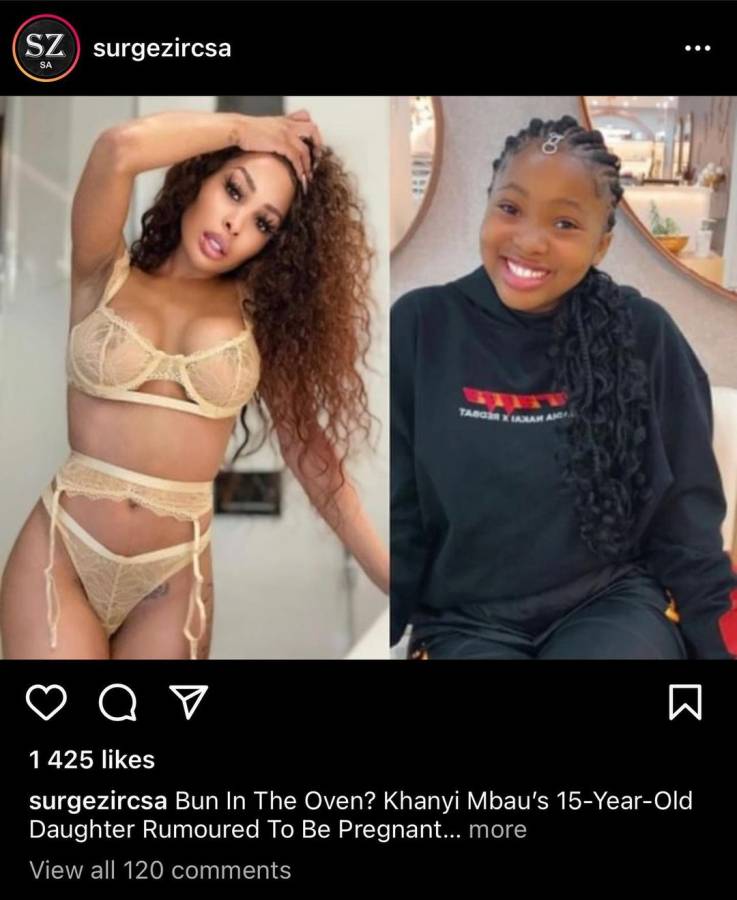 I am not one to entertain gossip especially from any gossip blog. I am never phased by anything said about me or my family, sadly it’s been a burden I have had to carry for years. MAKING FUN OF ME HAS BECOME A FRANCHISE
.
THE most hurtful , false things have been said about me for over 18 years. It’s been so bad that it’s taken away from my profession of being an actress and musician.
.
BUT ONE THING I WILL NOT ALLOW IS MY DAUGHTER BEING VICTIMISED AND ABUSED BY A ROMOUR STARTED BY A WOMAN ON TIKTOK @bigmmam9410 FROM AN INNOCENT FAMILY VIDEO POSTED BY LASIZWE.
.
HATE ME ALL YOU WANT BUT @MBAU2 is a child. THE FACT THAT THE FIRST THOUGHT THAT COMES TO ALL YOUR MINDS IS THAT A CHILD COULD BE PREGNANT SHOWS HOW SICK OF A SOCIETY WE HAVE ALL BECOME.
.
NO WONDER RAPE, CHILD ABDUCTION AND ABUSE HAS BECOME A NORM AND WHY STATS ARE SO HIGH.
.
OUR CHILDREN ARE IN DANGER, THE ENERGIES WE ADULTS PUT OUT ARE VILE AND DISGUSTING. WE SHOW NO FAITH IN THEM AND DONT RESPECT CHILDREN.
.
NO WONDER KIDS ARE COMMITTING SUICIDE. THIS IS A FORM OF CYBER BULLYING AND YOU ARE ALL BULLYING A CHILD!!! MY CHILD! AND THIS NEEDS TO STOP.
.

THEN YOU ALL WANT TO SAY AMA 2K HAVE NO RESPECT!! HOW WHEN YOU AS GROWN FOLK TREAT THEM THIS WAY!
.
Blogs such as @surgezircsa / and a YouTube blog TEAWORLD are low for blogging about children and all the adults that have jumped on in amusement is disgusting! COME FOR ME I am in the game! my success has always had you all mad BUT LAY OF MY CHILD WITH ALL THIS FAKE NEWS! NONE OF U HAD PERFECT BODIES AT 15 she is going through puberty and is a developing young girl!!!

She traced the rumour and gossip to a woman on Tik Tok. She deplored the whole nonsense, insisting the society is the way it is – with rape and GBV rampant because people’s thinking is skewed.

Anyway, Khanyi Mbau has got a new role in The Wife, a ShowMax flick and she’s excited to share the same with the world.

Tags
Khanyi Mbau
John Israel A Send an email 17 December 2021
Back to top button
Close
We use cookies on our website to give you the most relevant experience by remembering your preferences and repeat visits. By clicking “Accept All”, you consent to the use of ALL the cookies. However, you may visit "Cookie Settings" to provide a controlled consent.
Cookie SettingsAccept All
Manage Privacy