Khanyi Mbau and Tebogo Lerole announce split after 10 years as a couple.

Sometimes good things come to an end. While it may be hard to accept that, it can be heart breaking but best to move on. Khanyi Mbau is finally moving on from her failed romance with Tebogo Lerole after ten years. We dont know of we will also be able to.

We have gotten so used to them as a couple but it’s sad to see them part. The couple had split in the past but got back together to work things out. However, Khanyi has revealed that getting back together further drove them apart from each other.

She took to her Instagram page to announce their split which seems to be more Tebogo’s choice. She revealed she is choosing to respect it. According to her, she wants to let him soar to greatness. We wish them well on their new lives apart. 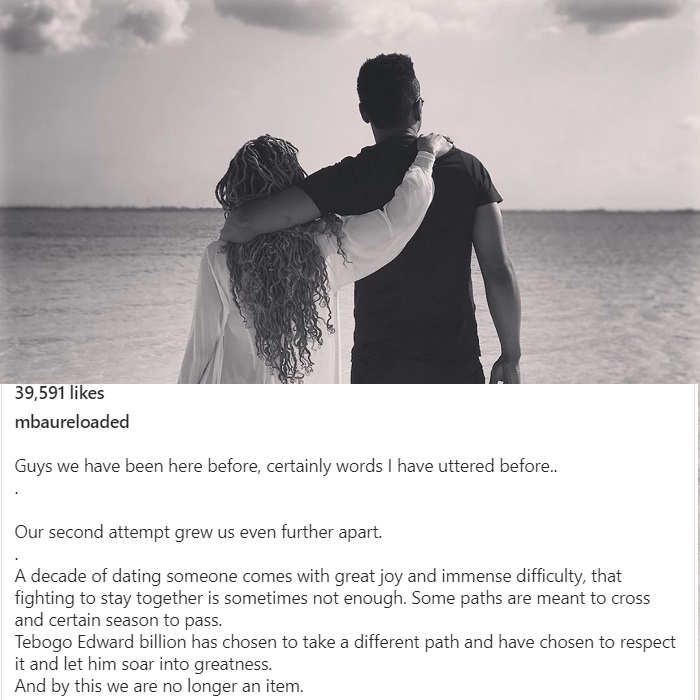 Tags
Khanyi Mbau Tebogo Lerole
John Jabulani Send an email 8 July 2020
Back to top button
Close
We use cookies on our website to give you the most relevant experience by remembering your preferences and repeat visits. By clicking “Accept All”, you consent to the use of ALL the cookies. However, you may visit "Cookie Settings" to provide a controlled consent.
Cookie SettingsAccept All
Manage Privacy