Netflix’s first African reality show, dubbed Young, Famous and African,  is coming this March and fans are excited about it all.

Nadia Nakai is one of the leading female musos in South Africa right now. She had broken into the rap scene with a song titled “Yass Bitch” and has continued to drop numbers, rising with each drop.

Khanyi Mbau is more of an actress but pops now and then as an ancillary singer on the songs of her associates. She’d recently charmed fans with her sterling performance as Zandile in the flick The Wife.

She posted about the upcoming reality show, asking her fans to look forward to it on March 18. 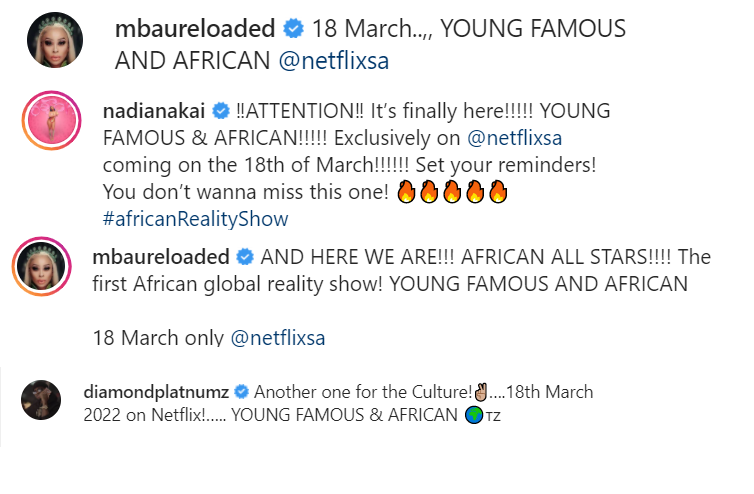 Naked DJ calls the shots at the decks and turntables. The DJ and his wife recently separated, but the music continues for him, of course.

Andile Ncube is a media personality and producer who has been in the media industry since 2003.

Well. Y’all gotta get ready for March 18. Stay tuned for more if you please.

Tags
Andile Ncube Khanyi Mbau Naked DJ Netflix
John Israel A Send an email 15 February 2022
Back to top button
Close
We use cookies on our website to give you the most relevant experience by remembering your preferences and repeat visits. By clicking “Accept All”, you consent to the use of ALL the cookies. However, you may visit "Cookie Settings" to provide a controlled consent.
Cookie SettingsAccept All
Manage Privacy