Popular Mzansi actress and reality star, Khanyi Mbau say she needs a sugar daddy and not a boyfriend.

A lot of Mzansi’s biggest celebs are in relationships that they either keep away from the public eye or show off for their fans to enjoy. For some time now, Khanyi Mbau has been in a relationship with a Zimbabwean billionaire boyfriend, Kudzai.

Before they began dating, Khanyi had stated that she needed a rich boyfriend. It was basically an answered prayer when it happened. A recent tweet from a Twitter user saw the reality star give a well thought out reply.

The tweet spoke about maturity for women being when they realize that they need a sugar daddy and not a boyfriend. Reacting to it, the popular actress revealed that she was clearly born mature. This proves that Khanyi is only into sugar daddies and does not have time for boyfriends. 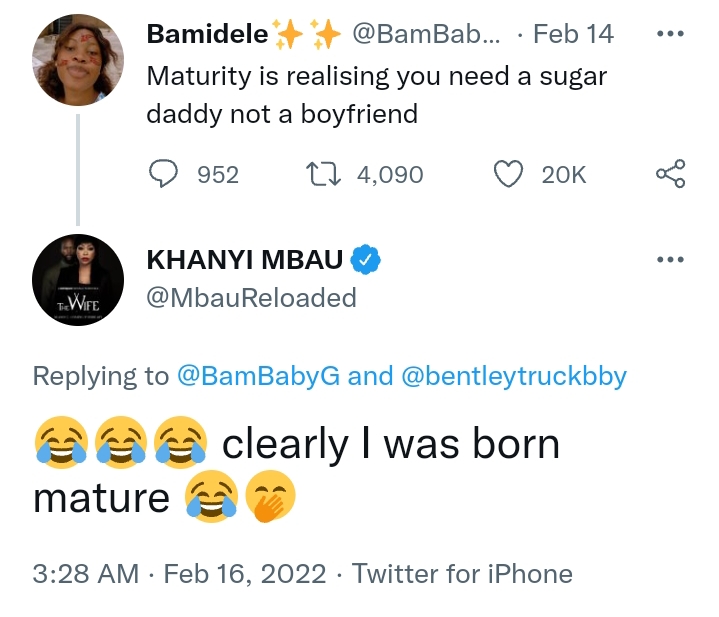 Tags
Khanyi Mbau
John Jabulani Send an email 17 February 2022
Back to top button
Close
We use cookies on our website to give you the most relevant experience by remembering your preferences and repeat visits. By clicking “Accept All”, you consent to the use of ALL the cookies. However, you may visit "Cookie Settings" to provide a controlled consent.
Cookie SettingsAccept All
Manage Privacy