It looks like Khanyi Mbau and her Zimbabwean lover Kudzai Mushonga are about to take things to permanent site in their relationship.

Khanyi Mbau has given every hint in the book to show how deeply in love she is with the Zimbabwean fugitive, most recently by tattooing his name to leg. But she isn’t stopping there. She’s been praising Mushonga’s Shona tribesmen to the heavens and back.

On his part, Mushonga has indicated interest in paying her lobola. Curious fans had asked the businessman about this, and he has indicated his willingness to pay about R1 million for her lobola. You can check out the image below. 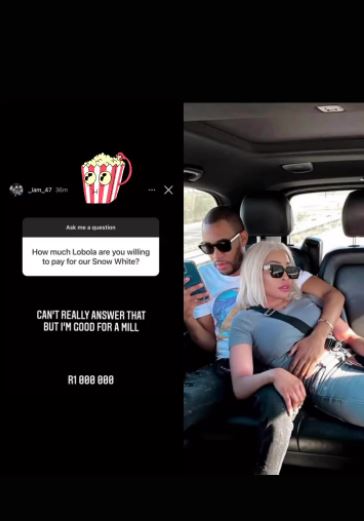 In all of this, one man who appears to be the “loser” is Tebogo Lerole, Khanyi Mbau’s ex. The pair had spent about a decade together before parting ways. As Khanyi had stated back then, it was difficult letting go.

Much later, it appeared Tebogo Lerole regretted the parting as well, as he recalled the beautiful moments they shared together, including going on a safari.

But will Mushonga, who is said to be a fugitive from the law in Zimbabwe, and Khanyi Mbau eventually end up husband and wife? If that should happen, it would be Khanyi Mbau’s second marriage.