Popular media personality and Oasis church pastor, Khaya Mthethwa is currently investigating an ongoing rape case involving members of his church. A pastor of the Oasis church has been accused of rape by a member of the church, a lady named Zinhle.

In a thread which has been gaining a lot of attention on Twitter, Zinhle detailed the events that led to the alleged rape, and how it happened. According to her, she got into a relationship with one of the church pastors. She revealed that prior to the relationship, they had both agreed that there would be no sexual intercourse between them.

This was because Zinhle is both a virgin and an avid Christian who does not believe in sex before marriage. However, according to her, the said pastor forced himself on her and raped her in April 2019, while they were spending time together.

She revealed she reported the incident to both the church and the police but none did a thing about it. Reacting to the news, Khaya stated that he is currently looking into the allegations. After a statement was released by the church, he revealed that the accused has been suspended while investigations are being carried out. 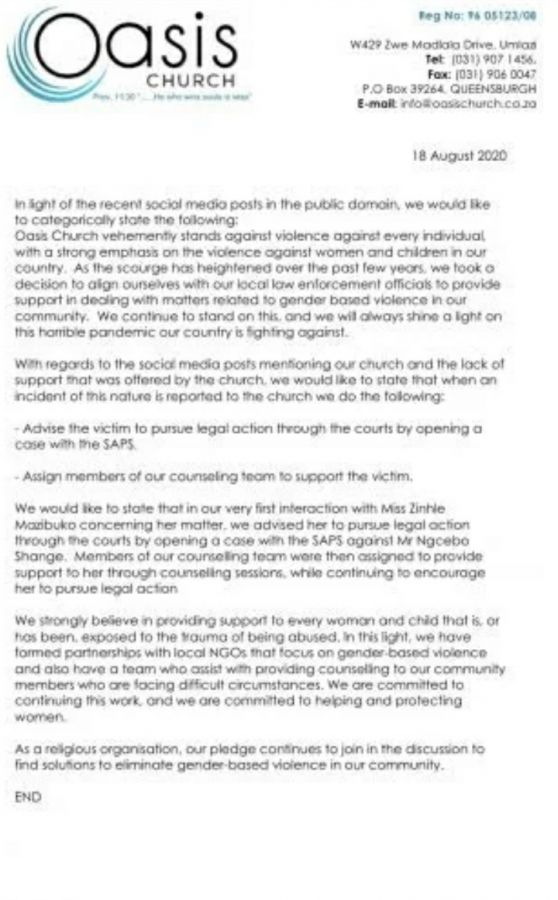 He was relieved of his duties pending the investigation.

Tags
Khaya Mthethwa
John Jabulani Send an email 18 August 2020
Back to top button
Close
We use cookies on our website to give you the most relevant experience by remembering your preferences and repeat visits. By clicking “Accept All”, you consent to the use of ALL the cookies. However, you may visit "Cookie Settings" to provide a controlled consent.
Cookie SettingsAccept All
Manage Privacy