Kid Kini has given us a couple of freestyles previously, and it is clear from past records that he is good at it. Good news is that the South African musician has just dropped another freestyle, and it’s worth hearing.

Like in previous freestyles, the muso shared the present one via his social media pages. Taking to Instagram 10 hours ago, the Ambitiouz Entertainment star shared a clip of him spitting on the mic. 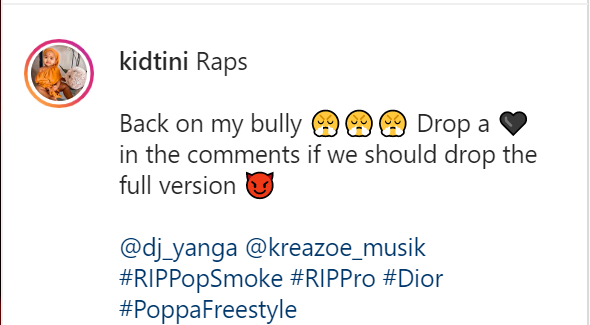 Fans aren’t exactly complaining right now, however. Kid Tini may be taking his time, but when the full version drops, we are sure it is going to bear some thunder.

For now we invite you to immerse yourself in Kid Tini’s new freestyle and keep your eyes peeled for the full version. It would be our pleasure to share it with you when it drops.

Well, what do you think of the new freestyle?

Tags
Kid Tini
John Israel A17 June 2020
Back to top button
Close
We use cookies on our website to give you the most relevant experience by remembering your preferences and repeat visits. By clicking “Accept All”, you consent to the use of ALL the cookies. However, you may visit "Cookie Settings" to provide a controlled consent.
Cookie SettingsAccept All
Manage Privacy