Kim Kardashian recently showed off some splendid painting on her Instagram stories, ascribing them to her first daughter with Kanye West, North.

North West is only 7 and her mother is proud of her painting skills. By the way, North’s painting consists of trees and snow-peaked mountains.

Mixed reactions have greeted the painting the socialite shared. Some fans were stunned by the talent on display and commended North for her creative energies, stating as the daughter of two talented people, she could exhibit such creativity. 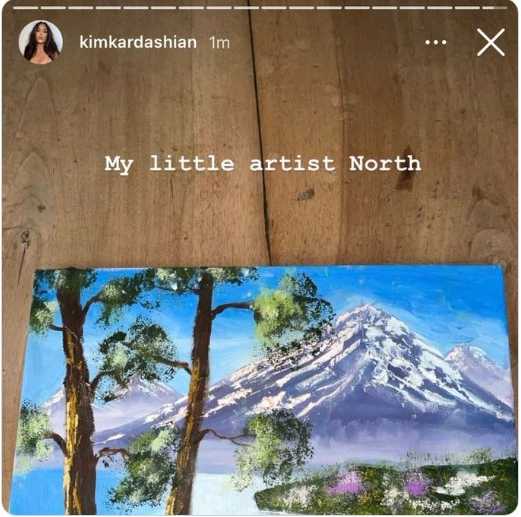 The painting drops amid speculations on Kim Kardashian’s current relationship with Kanye West. The pair is reportedly heading for a divorce and no longer speaking. Speculations about a divorce thickened last year in the hit of Kanye West’s campaign to be president of the United States and his sporadic threats and outbursts about her and her family on social media.

What do you think of the paintings ascribed to North West? You might want to join the conversation by dropping your thoughts in the comment section below.

Tags
Kim Kardashian
John Israel A Send an email 9 February 2021
Back to top button
Close
We use cookies on our website to give you the most relevant experience by remembering your preferences and repeat visits. By clicking “Accept All”, you consent to the use of ALL the cookies. However, you may visit "Cookie Settings" to provide a controlled consent.
Cookie SettingsAccept All
Manage Privacy