Kwesta to feature on Trace Urban’s The Originators as the show’s next guest.

When Trace Urban announced a new show to be hosted by Khuli Chana which centres on the lives and careers of SA Hip Hop artists, we all knew it would be a success. Fortunately for all Hip Hop fans, it is.

The show has featured several high profile guests including the very talented A-Reece who debuted as its first guest. It has also featured Focalistic and Nadia Nakai. We love how entertaining it has been, and how amazing on the guests were. Now, it has been announced that “Ngud” star, Kwesta will be the next artist to feature on the show.

The announcement was made via Trace Urban’s social media accounts. The popular rapper is expected to talk about his career and his family of course. We wonder if he would talk about his new born, but we doubt it because the show was reportedly recorded during the lockdown. 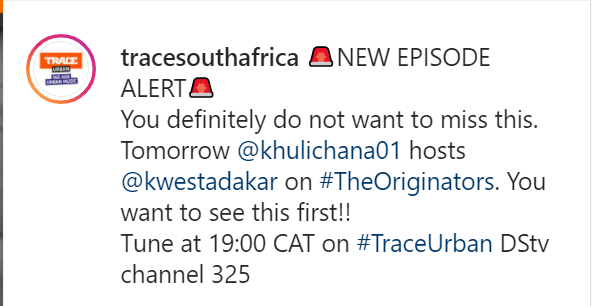 Tags
Khuli Chana Kwesta Trace Urban
John Jabulani Send an email 23 November 2020
Back to top button
Close
We use cookies on our website to give you the most relevant experience by remembering your preferences and repeat visits. By clicking “Accept All”, you consent to the use of ALL the cookies. However, you may visit "Cookie Settings" to provide a controlled consent.
Cookie SettingsAccept All
Manage Privacy