Kwesta reveals his struggles on being a first-time father in a recent maternity post made on Instagram.

Trust Mzansi rapper, Kwesta to always speak from the heart. The talented Hip Hop star is famous for pouring his heart out in his music, now, he’s doing it in an Instagram post. Kwesta and his wife, Yolanda Vilakazi are expecting their second child.

He revealed that it makes him “the happiest man alive”, however he is also scared of what the future holds due to the pandemic. Taking to Instagram, he shared a maternity shoot with his wife, organised by celebrity photographer, Austin Malema. The vintage shoot sees him and Yolanda laying on a car.

In the post captions, he detailed his struggles as a broke first-time dad when his daughter, Khai was born in 2012. He also revealed that he would work hard for not put his family in that position again. 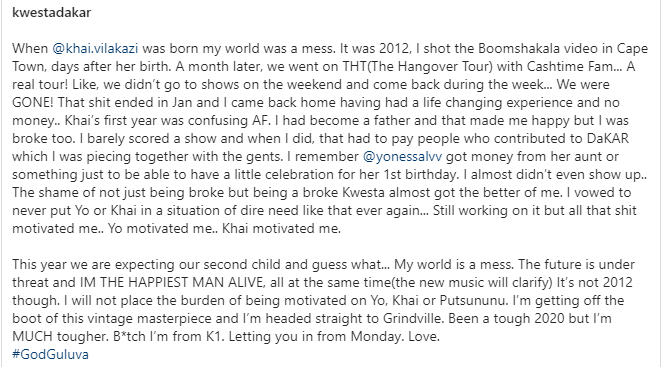