L-Tido thinks Sean pages isn’t focused, and he has given reasons for his verdict. The reason will most likely elicit great laughter.

According to L-Tido, who might be dropping a number with Family Tree rapper Nadia Nakai soon, he was in the studio and Sean Pages was supposed to bring him beats. But dude wasn’t anywhere near the studio with the beats.

L-Tido had apparently hooked Sean Pages with a girl earlier, and he stated that Sean Pages was with the girl and had switched his phone off. He ended up dismissing his friend as not focused. You can check out his tweet below. 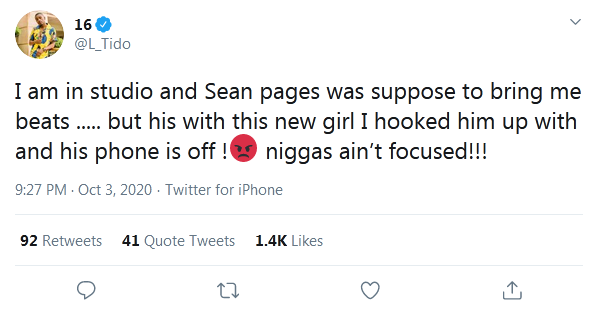 The tweet provoked laughter among his fans, with some of them insinuating coition might be going on. One fan, pushing that angle, stated that the weather was just on point.

Well, our focus is on the music. With L-Tido speaking of beats, we’re sure the songster is currently cooking something in the studio. Whenever it drops, we’ll surely share it with you.

In order to be in the loop and not miss the drop, you might want to subscribe to our newsfeed as well as follow our social media channels. Well, what’s your take on L-Tido’s claim Sean pages isn’t focused?