DJ Supta and Lady Zamar apparently have a song imminent, and they are excited the world should not only know but look forward to what they have cooked together, a song titled “Haha.”

Their studio session didn’t begin and end overnight. It stared sometime in November 2020. Late that month, Supta had shared a clip of them together and joked that he was trying to sing. You can check it out below.

A month later, in December of the same year, he had shared a picture of their studio session proper, describing the songstress as king. (In case you miss the king reference, it was to her album “King Zamar,” which has long gone platinum).

A day ago, yesterday 13 January, Supta made it clear he had finished cooking a song with Lady Zamar. Working with her had been a thrilling experience for him, and he is impatient the world should hear what he and the “Butterfly” songstress have prepared. 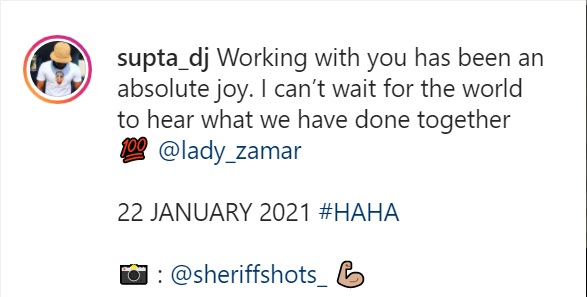 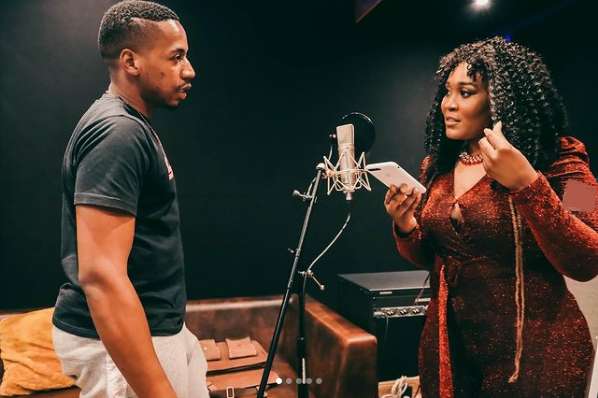 Would the “Haha” tune actually provoke “hahaha” from Mzansi’s denizens?

We’re looking forward to Supta and Lady Zamar’s “Haha” moment. Are you? You should. You might want to join the conversation by dropping your thoughts in the comment section below. Way to go!

Tags
Lady Zamar Supta
John Israel A Send an email 14 January 2021
Back to top button
Close
We use cookies on our website to give you the most relevant experience by remembering your preferences and repeat visits. By clicking “Accept All”, you consent to the use of ALL the cookies. However, you may visit "Cookie Settings" to provide a controlled consent.
Cookie SettingsAccept All
Manage Privacy