Honestly, it is crazy seeing how far the Amapiano genre has reached in only a few years. The genre has gone far beyond Mzansi into various other countries in Africa and also around the world. Virtually every artiste in SA has joined the train both as lead and featured acts.

However, there are still a couple of well known artistes who are yet to join the train. During a recent Q&A with Lady Zamar, the “Charlotte” hit maker revealed she will be joining it soon. A fan asked when she would release an Amapiano song, and she simply replied “sooon”.

Now, that’s something to look forward to. The talented singer has been dropping hints that she’s back in the studio after her highly publicized case with ex, Sjava. Hopefully, she drops an Amapiano jam soon. Who said Amapiano was dying again? 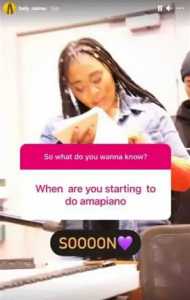