Lavida Nota appears to have given himself the job of policing Mzansi’s music space and artistes. The songster has lobbed grenades at some notable figures, including Cassper Nyovest and Nasty C, and clearly he isn’t done yet.

One recalls that Cassper Nyovest, who was totally unimpressed by the attack on his person, had dismissed Nota as a fraudster.

Radio personality Scoop Makhathini is the latest casualty of Lavida Nota’s missile. In a recent Instagram post, Lavida Nota denounced Scoop as an innovator of nothing and a misogynist for having attacked Elaine, another South African musician.

He said Elaine makes music that is true to her, and that it is shameful of Scoop, who is much older, to use her to stand. He also stated that Scoop’s rests solely on his command of English, basketball playing history and his knowledge of American fashion. 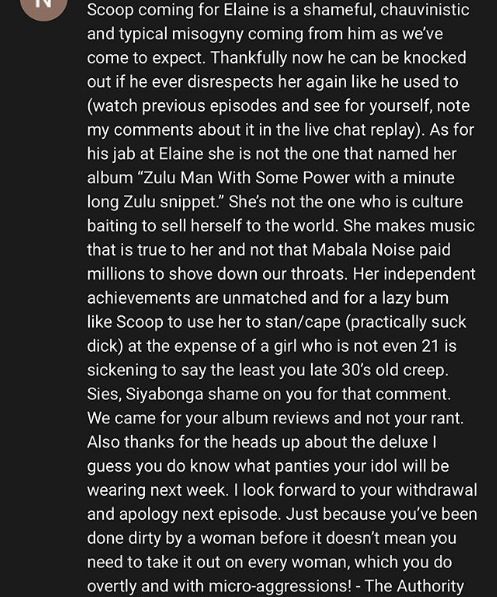 According to him, he is looking forward to Scoop’s withdrawal and apology in the coming days. But will that happen? By the way. Scoop, who recently appeared on Newlandz’s Finest’s “Maduzane,” is yet to respond to Lavida Nota’s sortie.

Well, what do you think of Lavida Nota’s take on Scoop Makhathini? You might want to join the conversation by dropping your thoughts in the comment section below.