Lavida Nota contimues his critical drubbing of South African hip hop with a review of the albums released so far in the country.

He has reviewed AKA’s extended play “Bhovamania” and the works of a couple of other hip hop acts and think the qualitt is below par.

He urged whoever cared to listen to pick any top five tracks from AKA’s “Bhovamania” EP and compare the tracks to the top five tracks from Cassper Nyovest’s “Any Minute Now (AMN),” Nasty C’s “Zulu Man With Some Power,” Costa Titch’s “Made In Africa,” and J Molley’s “All Is fair in Love And War.”

Although Nota has little patience for what has been released so far, he is confident the imminent “Pop Star” album from Yanga Chief might redeem the “failures” of other albums.

Yanga Chief has given 7 November as the release dte of his “Pop Star” album. It takes robust faith in the songster’s creative powers for Lavida Nota to vet the compilation he has not listened to. 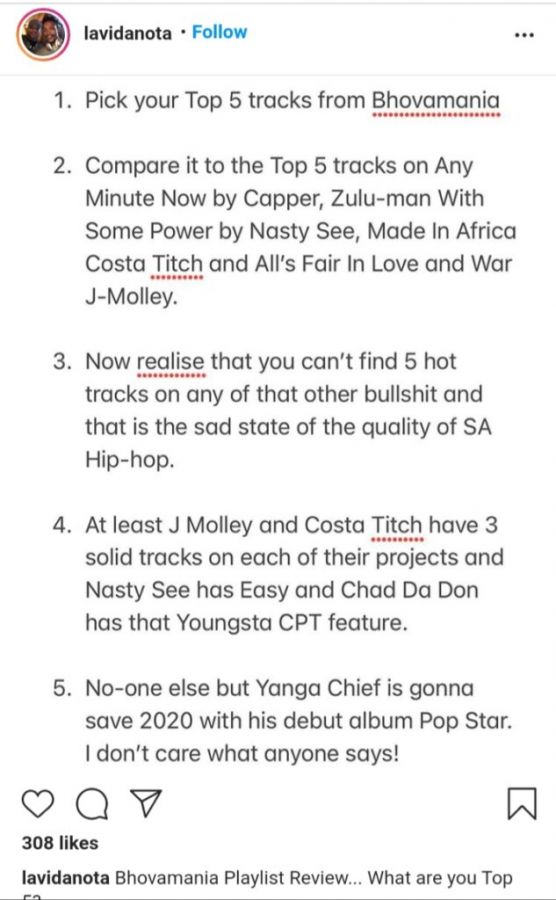 Lavida Nota’s take on the music industry as well as its musos are markedly controversial, and he has fought with some of the industry’s notable voices because of his views. Will there be an end to the fights?