Drip Footwear founder Lekau Sehoana is an inspiration to many entrepreneurs across South Africa some of whom would love to hear his story.

Well, the businessman has gone into some details on the lessons he learned while hustling his way to the top. In a recent tweet, he noted that after matric he was forced to go and hustle.

It didn’t go well initially, so he went back to school in order to fund the hustle. Soon enough, after studying civil engineering, he’d gotten a job, bought a Mini Cooper he didn’t need, and forgot his dream of owning a footwear brand.

Along the line, he got a serious awakening and started pushing the dream of his Drip Footwear brand. He founded Drip Footwear in February 2020 in a small room.

Within 8 months, he had 44 workers, 4 delivery cars, and 6 retail stores. And he’s still counting. You can check out the tweet below. 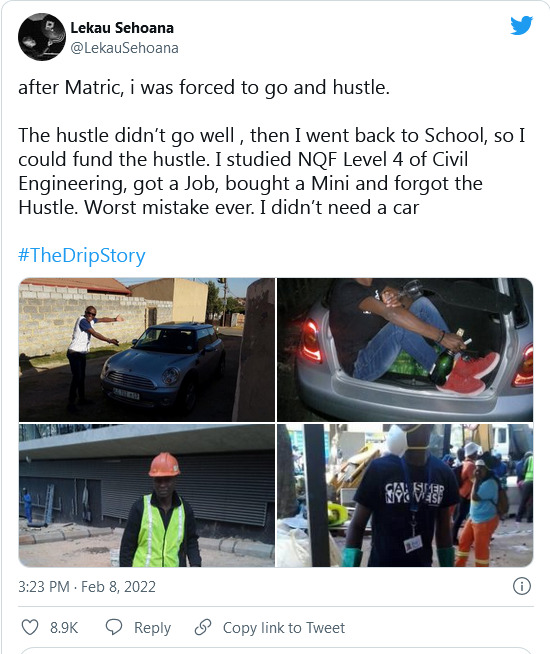 Fans who saw his tweet were pleased with it and encouraged him not to stop telling his story, as it serves as a pillar of inspiration to many out there. By the way, Drip Footwear recently entered into an R100 million sneaker partnership with the rapper Cassper Nyovest. Talk of fast growth.

Tags
lekau
John Israel A Send an email 9 February 2022
Back to top button
Close
We use cookies on our website to give you the most relevant experience by remembering your preferences and repeat visits. By clicking “Accept All”, you consent to the use of ALL the cookies. However, you may visit "Cookie Settings" to provide a controlled consent.
Cookie SettingsAccept All
Manage Privacy