Mzansi actress Lerato Mvelase will be starring in a new series dubbed 13 Weeks To Find Mr. Right, and she’s more than excited to take it up.

Media personality Phil Mphela broke the news in a recent tweet. He also mentioned that Mmonye Kunupi and Didi Khunou will be part of the show as well.

3 Weeks To Find Mr. Right is a romantic comedy that will be showing on the SAB11 network beginning February 6 this year, at 7:30 p.m.

Lerato Mvelase’s fans appear happy to see her take up the new role. The songstress is not new to comedy, so expectations are high she would ace the show later next month. 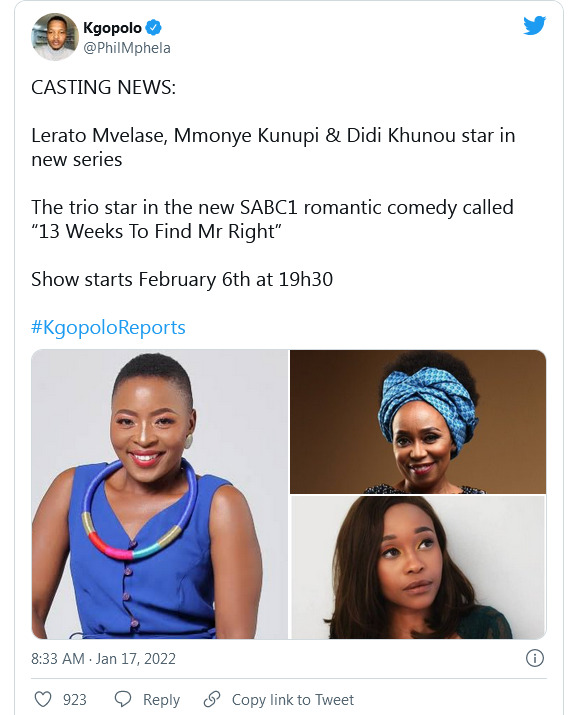 It would be interesting to see how Lerato Mvelase would interpret her role on the reality show. Back last year, speaking about relationships, she had noted that she was okay with being with a partner who sleeps with other women, so long as he does it safely.

Her words provoked an interesting conversation at the time, with some of her fans asking if it wasn’t a license to her partner to be a philanderer. Well, it appears like Lerato knows what she wants. And clearly, that’s what matters. Stay tuned. y’all.

Tags
Lerato Mvelase
John Israel A Send an email 18 January 2022
Back to top button
Close
We use cookies on our website to give you the most relevant experience by remembering your preferences and repeat visits. By clicking “Accept All”, you consent to the use of ALL the cookies. However, you may visit "Cookie Settings" to provide a controlled consent.
Cookie SettingsAccept All
Manage Privacy