After a six-year odyssey at Jacaranda FM, Liesl Laurie-Mthombeni leaves the station, taking with her many fond memories.

The former beauty queen shared a note on Instagram detailing how it felt to have served and to now be on the way out. In her Instagram post, she noted that she was hanging her earphones for the last time after almost a decade at the station.

She officially leaves the employ of the station today, June 30.

She touched on her odyssey, noting that she joined the station shortly after completing her reign as Miss South Africa. She described her days at Jacaranda FM, where she was a member of the “breakfast with Martin Bester” team, as an exciting chapter of her life. 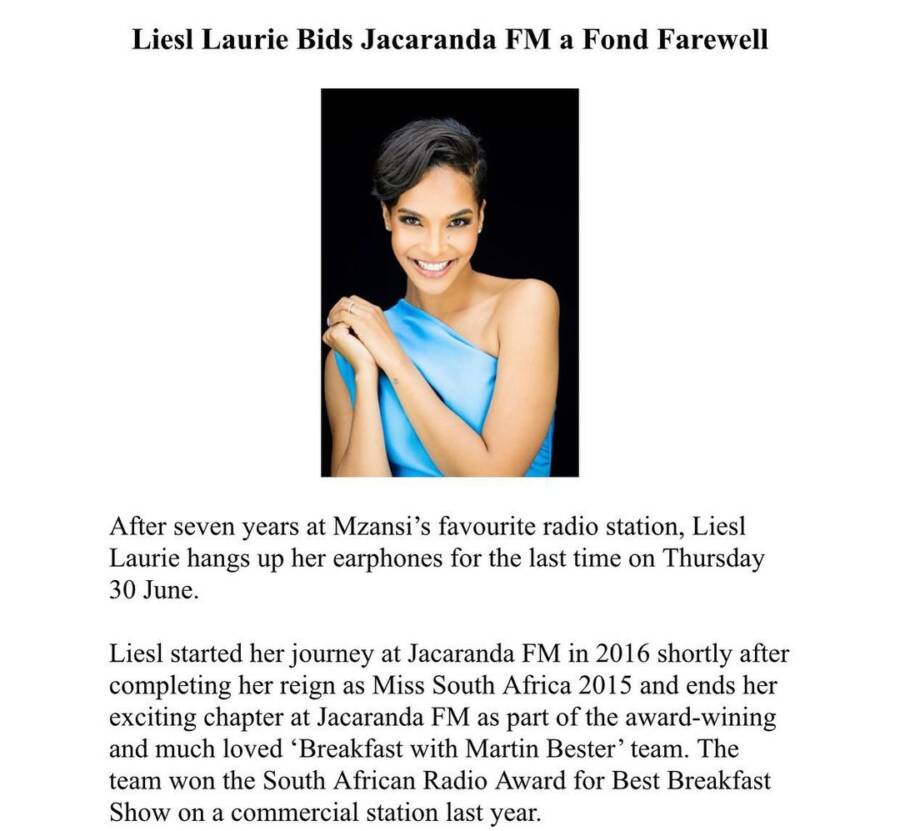 It was an emotional goodbye that wasn’t lost on her fans. They not only praised her for being part of a popular show but for the humanity she brought to the show as well.

Some of her fans used the opportunity to ask her what adventures she planned to get into after her Jacaranda FM exit. Well, that detail is unclear at the moment as the beauty hasn’t said anything about it.

Given how well she performed at Jacaranda, snapping another gig should be pretty easy.

Tags
Liesl Laurie
John Israel A Send an email 30 June 2022
Back to top button
Close
We use cookies on our website to give you the most relevant experience by remembering your preferences and repeat visits. By clicking “Accept All”, you consent to the use of ALL the cookies. However, you may visit "Cookie Settings" to provide a controlled consent.
Cookie SettingsAccept All
Manage Privacy