Speculations are rife that Lil Wayne might receive presidential pardon from President Donald Trump on his last day in office. Lil Wayne had pleaded guilty to a firearm possession charge in December last year.

The rapper is in a short list of peeps expected to be pardoned a day before Trump hands over to president-elect Joe Biden. Another notable name on the list is the “Pimpin Ain’t Easy” star Kodak Black, who is in jail on a gun possession charge.

The speculations of a presidential pardon are hinged on Lil Wayne having supported Donald Trump’s reelection bid in 2020. At the same time, Kodak Black had publicly praised the president and endorsed him as well.

Last year October, months before his guilty plea, Lil Wayne apparently had a meeting with Donald Trump during which he discussed criminal reform, among other subjects. 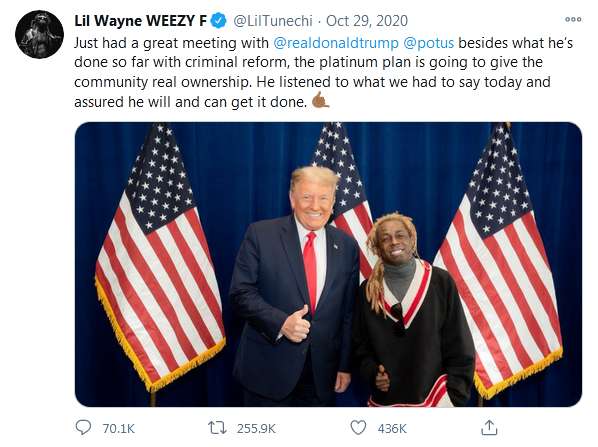 Would President Trump ultimately pardon Lil Wayne before handing over to Biden? We can’t tell. But if that should have, Lil Wayne’s support for the outgoing president would have yielded great dividends.

In the interim, the songster and his fans are watching. Do you see Lil Wayne getting a presidential pardon, though? You may share your thoughts in the comment section below.

Tags
Lil Wayne
John Israel A Send an email 19 January 2021
Back to top button
Close
We use cookies on our website to give you the most relevant experience by remembering your preferences and repeat visits. By clicking “Accept All”, you consent to the use of ALL the cookies. However, you may visit "Cookie Settings" to provide a controlled consent.
Cookie SettingsAccept All
Manage Privacy