April begins on a great note for South African actress Linda Mtoba as she’s unveiled as the new face of La Cioccolata.

It’s a piece of exciting news and one she’s only too happy to share with her fans. In a post on Instagram, she has announced her joining the company while also expressing excitement at being part of a collective to which another celebrated South African, Winnie Mashaba, belong.

La Cioccolata prides itself on being a maker of fantastic chocolates that anyone would love.

From the reactions to Linda’s post, it was clear that her fans were just as excited about this milestone in her brand influencing life. Most of her fans were only too happy to wish her a great. 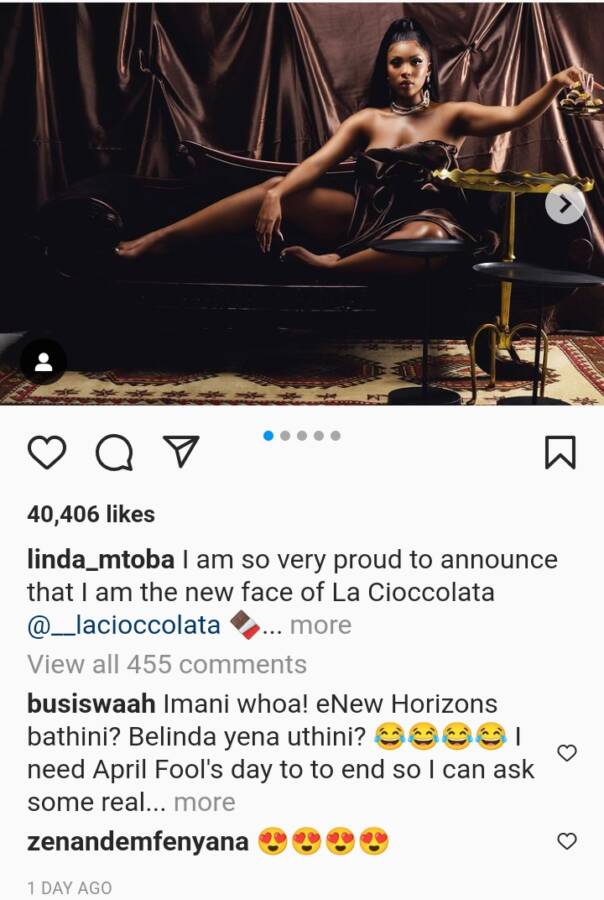 Her popularity one and off-screen is why she got her current brand-influencing role with the chocolate house. It will be interesting to see how she will take the brand to own.

Er, it’s okay to have that dark chocolate. Medical science says it’s excellent for your health. For Linda Mtoba, congratulations are in order. Some solidarity with a face Mzansi loves to see.

Tags
Linda Mtoba
John Israel A Send an email 2 April 2022
Back to top button
Close
We use cookies on our website to give you the most relevant experience by remembering your preferences and repeat visits. By clicking “Accept All”, you consent to the use of ALL the cookies. However, you may visit "Cookie Settings" to provide a controlled consent.
Cookie SettingsAccept All
Manage Privacy