With no information from him yet on when he would release his “Bhovamania” album, AKA has kept fans entertained with teasers from the project.

Called the snippet the Snippet god because of his well- documented habit of treating fans to snippets of the songs he is working on, AKA has just released another snippet from his “Bhoavamania” album. He captioned the teaser Cobra. You can check it out below.

Also, it appears the “Fela In Versace” rapper has changed his mind about his “Iron Duke” song with “Limpopo Champions League” singer Sho Madjozi.

Previously the songster had stated he didn’t vibe with the song and wouldn’t include it in the album. He appears to have had a change of mind.

Fans have been pestering him to include the song in his imminent project, and he has caved in finally. In a tweet today 22 September 2020, the songster said he’s changed his mind about the song ad will include it as part of “Bhovamania.” You can check out his tweet below 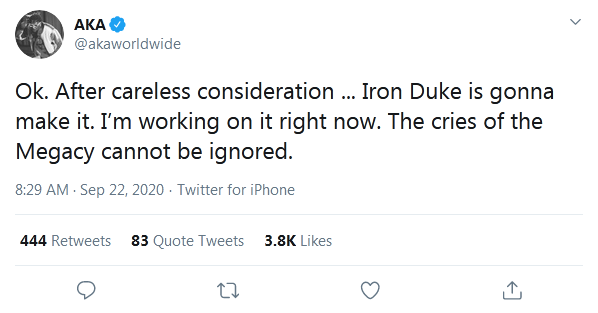