Economic Impact assessment study by the NFVF shares grim effects of the pandemic on the industry. 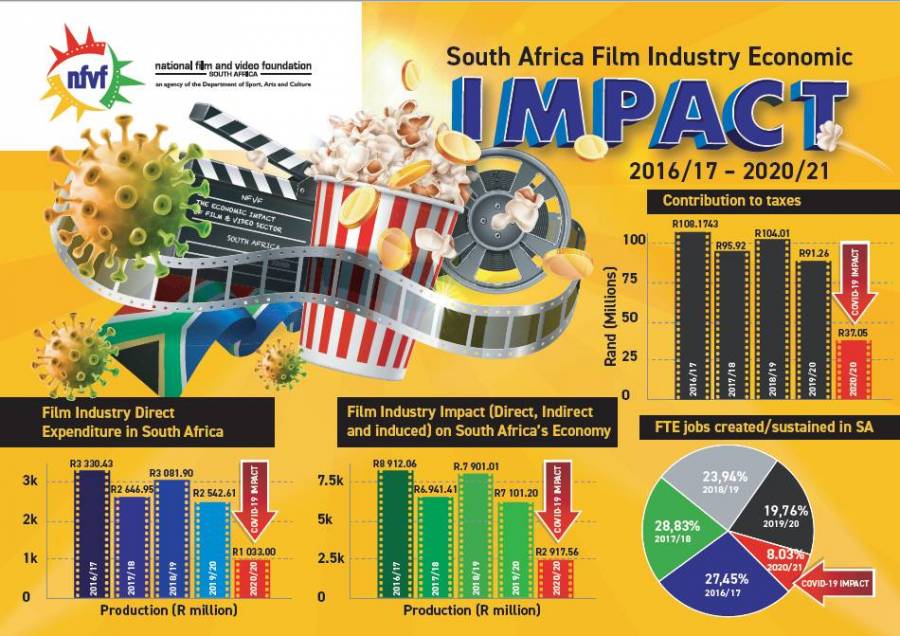 The National Film and Video Foundation (NFVF), an agency of the Department of Sport, Arts & Culture today presented the findings of the third Economic Impact Assessment Study (EIAS) which measures the economic contribution of the South African film & video industry to the country’s GDP between April 2016 (2016/17) to March 2021 (2020/21).

The 2021 assessment includes the impact that the COVID-19 pandemic has had on the industry, in turn contributing to its impact on the country’s economic outlook.

Some key highlights from the economic impact assessment highlight that:

Despite the challenging effects the pandemic has had on the film & video industry, it is important to note the positive impact the industry has. The industry has contributed intangible benefits to the wider economy and society including destination profiling & marketing and tourism, skills development, contribution to social cohesion and development & distribution of local content among others.

Reflecting on the results of the report, Botse Matlala, NFVF Research & Compliance Manager said, “For us, doing this study meant making real & tangible, the total economic contribution of the film industry, illustrating how it plays a critical role in the socio-economic development of the country. The last year has unfortunately set the industry back due to COVID-19. The focus for us now, is working collaboratively, with the industry to re-build our much-loved art.”

“South Africa has a vibrant film industry that is contributing meaningfully to the country’s economy and is certainly brimming with potential to make an even greater contribution despite the negative impact of Covid-19 in the past year.

The organisation has already worked on initiatives to support filmmakers and online content creators alike. Content Development is at the core of the work the NFVF engages in – it is where the mandate of the organisation is most clearly fulfilled by providing the film industry with critical financial support and technical expertise to take a film project from an idea to a product that can be screened.

We remain committed to partnering with players in mitigating challenges that have an impact on the sustainable growth and development of the industry.”, concluded Makhosazana Khanyile, NFVF CEO

Tags
Covid-19
Thato Siyabonga Send an email 23 September 2021
Back to top button
Close
We use cookies on our website to give you the most relevant experience by remembering your preferences and repeat visits. By clicking “Accept All”, you consent to the use of ALL the cookies. However, you may visit "Cookie Settings" to provide a controlled consent.
Cookie SettingsAccept All
Manage Privacy