It’s no longer news that Wizkid was absent during Banky W’s wedding to actress Adesua Etomi in 2017. But how did Banky feel about the absence of a musician who was once signed to his Empire Mates Entertainment (EME) record label?

Banky W was silent about that for years. Just recently, though, in an interview with Ebuka Obi-Uchendu, he made it clear that he was disappointed that Wizkid didn’t show up for him. He graciously admitted that Wizkid tried because he had a lot of shows at the time.

Still, in Wizkid’s deal with EME, he claimed that the. Star Boy didn’t fulfil his part of the contract. He said Wizkid had a five-album deal with the record label but only released two (“Starboy” and “Ayo”) under the record label.

He left in 2014. Banky W noted that although Wizkid didn’t fulfil his part of the contract, he let the musician go because Wizkid wanted to.

Banky: “Yes I was disappointed Wizkid didn’t come for my wedding but I know he tried”

But what does Wizkid think about Banky W’s claim? Reacting to a tweet by a fan who had shared a snippet of the Banky W interview, Wizkid had dropped a “LOL,” indicating he didn’t care much about what was said. 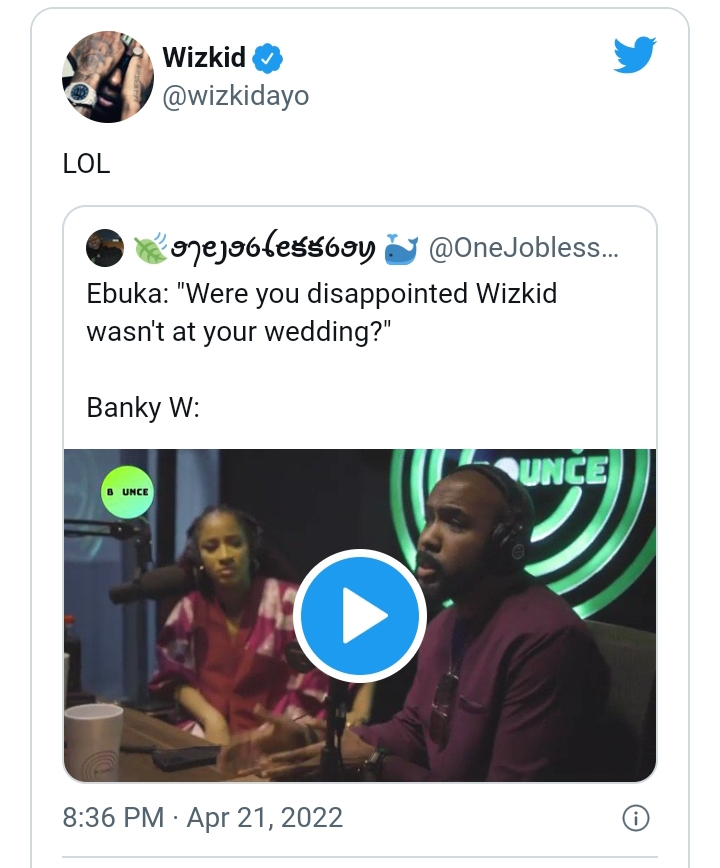 Tags
Banky W Nigeria Wizkid
John Israel A Send an email 22 April 2022
Back to top button
Close
We use cookies on our website to give you the most relevant experience by remembering your preferences and repeat visits. By clicking “Accept All”, you consent to the use of ALL the cookies. However, you may visit "Cookie Settings" to provide a controlled consent.
Cookie SettingsAccept All
Manage Privacy