SA Hip Hop star, Lucasraps has reacted to his alleged beef with A-Reece.

Now and again, rumors of beefs fly on the SA Hip Hop scene. Sometimes they turn out to be accurate, and other times, they’re just speculations. Rapper, Lucasraps was recently rumored to have beef with A-Reece.

Reece had labeled himself the “best rapper in Africa”, and around the same time, Lucasraps dropped a joint tagged “Best Rapper In Africa”. This led fans to believe that the two were feuding, but both parties did not confirm it. While engaging in a Q&A with his fans on Instagram, the “Bigger Than Us” star reacted to the alleged beef.

A fan asked, “why you beefing with Reece?” Replying, he revealed that he isn’t. He also acknowledged the rapper for making “dope music”. This means that releasing the song was only a coincidence. We wonder what A-Reece would have to say. 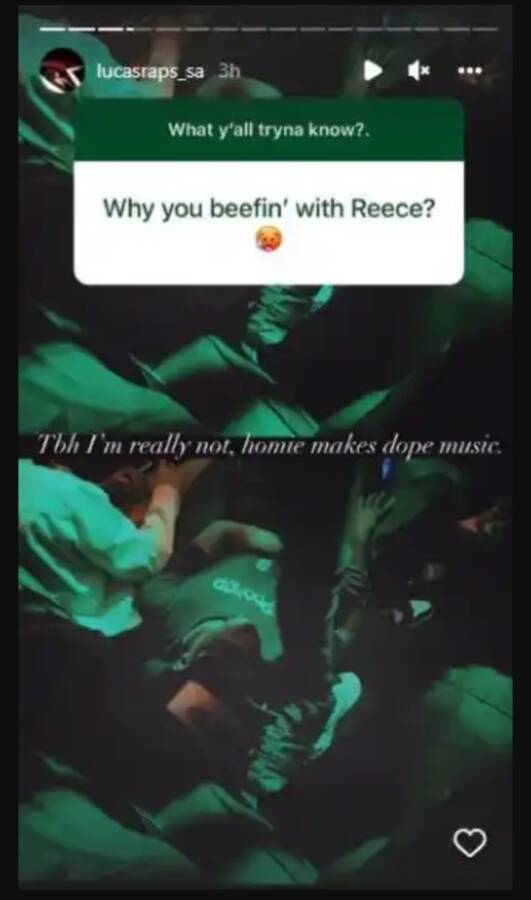 Tags
A-Reece Lucasraps
John Jabulani Send an email 18 May 2022
Back to top button
Close
We use cookies on our website to give you the most relevant experience by remembering your preferences and repeat visits. By clicking “Accept All”, you consent to the use of ALL the cookies. However, you may visit "Cookie Settings" to provide a controlled consent.
Cookie SettingsAccept All
Manage Privacy