The songster announced the imminent album in an Instagram post today 1 March 2021. According to the muso, the compilation features several artistes – at this point unnamed. He also let his fans know that the album will be released this Friday 5 March 2021.

For now, in place of a tracklist and list of guests, fans will have to content themselves with the artwork fo the upcoming project. According to the songster, he had poured his heart and soul into this body of work and can’t wait to share it with his fans. You can check out his post below. 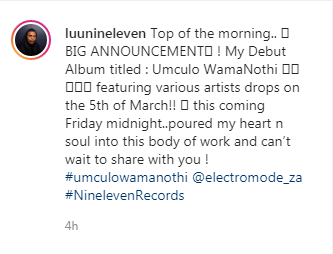 His fans are excited for what is to come.

As the go-to place for all things South African music and entertainment, you can count on us to bring the album to you on release. In order to be among the first to listen to the project, you may want to follow our social media channels as well as subscribe to our newsfeed.

Have you any expectations regarding the imminent album, though? You may want to join the conversation by dropping your thoughts in the comment section below.