It looks like the #BrownVinegarAndSaltTestimony comedy isn’t about to end anytime soon, as figures in the twar and rival record labels, Mabala Noise and Ambitiouz Entertainment, have involved the Zulu man With Some Power Nasty C in their skirmish.

Yesterday we reported how the hashtag #BrownVinegarAndSaltTestimony trended on Twitter and how Ambitiouz Entertainment trolled rival Mabala Noise and former artiste Emtee. You may want to read the backstory here.

It appears Ambitiouz Entertainment isn’t keen on ending the trolling just yet. But who is complaining? Certainly not the fans, who are having their fill of entertainment and laughing uproariously.

Ambitious Entertainment recently shared a picture of one of its artistes, Sjava, which it captioned “Indlalifa 🖤..The General, The Ambitiouz Sniper.” Mabala Noise responded that it was like them posting about Nasty C.

Missed the joke? Come along then. Nasty C was formerly signed to Mabala but left in circumstances that wouldn’t make anyone smile. Sjava, on the other hand, is signed to Ambitiouz Entertainment. Speculations are rife he is gearing to leave, in the tradition of Emtee, Cici, Amanda Black, and others.

You may want to check out the twar, as it played out on Twitter, in the following screenshots. You may share your thoughts, too. 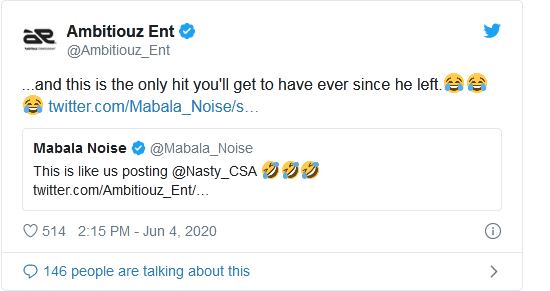 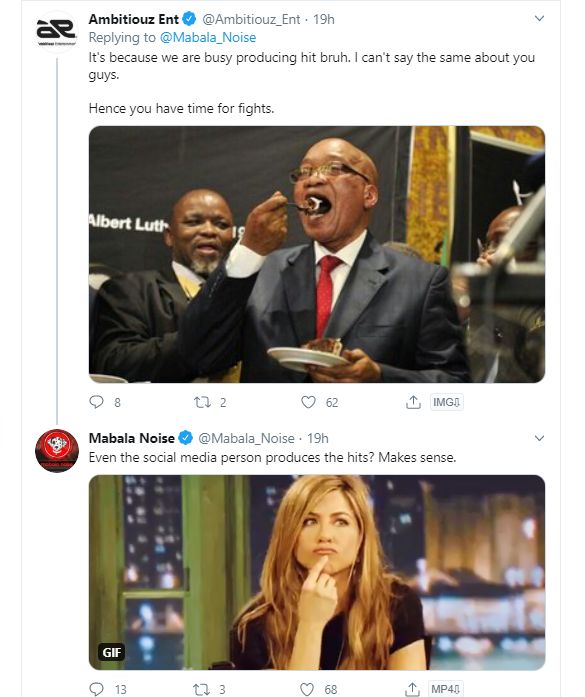