South African media personality MacG has been crowned Podcaster of the Year at the 2021 VN Global Media and Entertainment Awards, and he’s so happy about his win.

Taking to social media soon after, the opinionated host of “Podcast and Chill With MacG” had shared the news of his win with his fans, asking them to join him as he celebrates.

The organizers of the award, according to a report by TimesLive, were particularly pleased with MacG for giving opportunities to other podcasters on his platform. 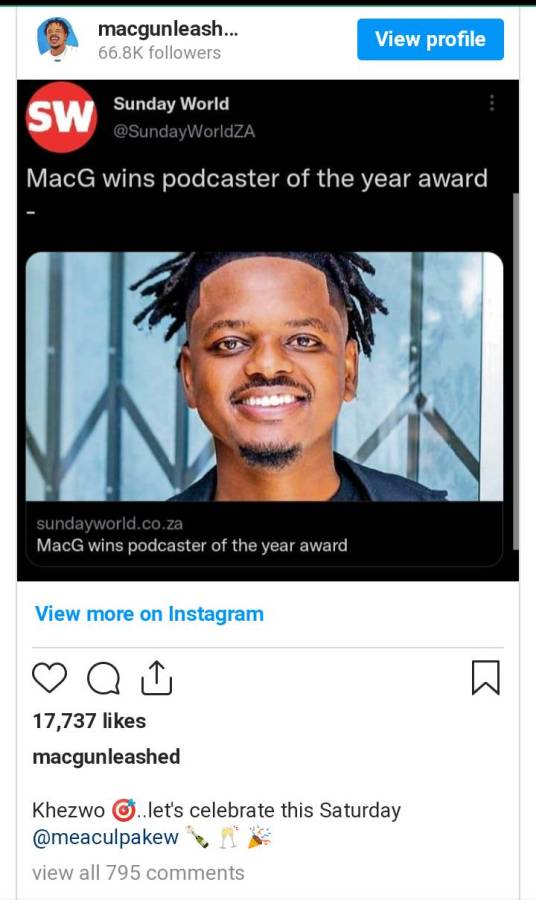 His platform had also riled AKA, as it had been revealed there that he was abusive to her, a claim he rejected.

Because of his strong opinion, MacG trends every other day. And while many in South Africa commends his audacity, some think he’s overdoing things.

MacG recently interviewed radio personality Tbo Touch on Podcast and Chill, but Touch was adamant the interview was censored and his story was never fully told. He said he’d still tell his story at another time.

Tags
MacG
John Israel A Send an email 9 November 2021
Back to top button
Close
We use cookies on our website to give you the most relevant experience by remembering your preferences and repeat visits. By clicking “Accept All”, you consent to the use of ALL the cookies. However, you may visit "Cookie Settings" to provide a controlled consent.
Cookie SettingsAccept All
Manage Privacy