When listing new albums to anticipate this year, you can now add Madanon to the list, because he’s got something brewing. Now it seems as though every Mzansi artist is dropping new music this year. Some have dropped theirs already.

The talented muso has made several appearances on the airwaves this year. He previously delivered “Nayoke” with Okmalumkoolkat and appeared on Moonchild Sanelly’s “We Mah” alongside Skillz and Mampintsha. Now, he has announced a new single titled “Jesu Omncane” featuring Benzy. It is produced by General C’Mamane and Musraa.

He revealed that the release date will be announced on Wednesday. He also revealed plans to drop a new music video for “Nayoke” with Okmalum. The “Mandisa” hit maker is also readying his upcoming album for release. He calls it “Underrated”. He revealed that it is 80% done and isn’t ready for release yet. That’s a whole lot of plans for the year. 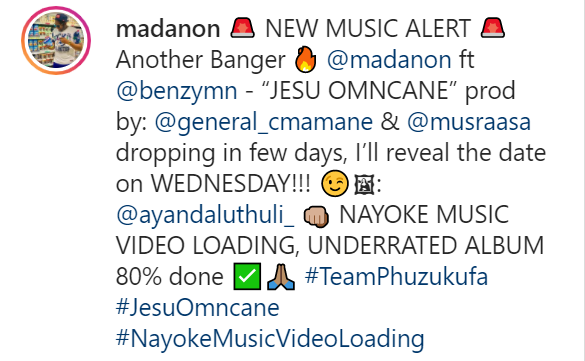