Time flies but someone we mange to remember people and things we value even when they’re no longer there.

It was an emotional moment for Mafikizolo singer Nhlanhla Nina as she memorialized her late daughter’s birthday. Zinathi would have been 17 this week. She might be dead, but she’s forever in her mothers heart.

Zinathi had died in a fatal road accident while travelling with her grandmother.

Zinathi’s death drove Nhlanhla Nciza to the brink of depression and she even contemplated suicide at some point. But as she had stated in previous social media posts, the healing of her soul and spirit began when God gave her another child, a son.

In a video message yesterday, Nhlanhla Nciza called Zinathi a beautiful angel and wished her a happy birthday wherever she might be in heaven. She urged Zinathi, her “little angel,” to continue resting in peace until they meet again.

The post attracted both celebs and ordinary folk alike. “Dance Comigo” songstress Kelly Khumalo was in the comments of Nhlanhla’s post and remembered Zinathi as a beautiful little girl. She sent her love and wished the Mafikizolo singer strength. You can check out the video below and join the conversation by dropping your thoughts in the comment section. 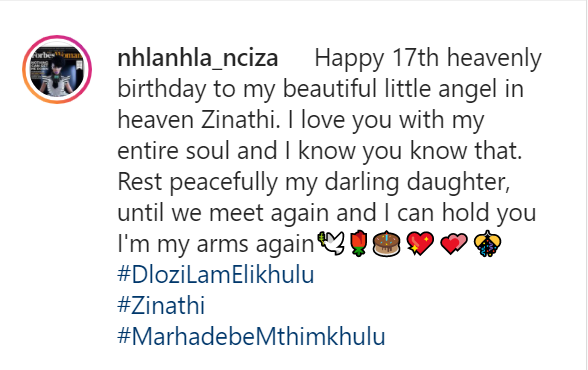 Tags
Nhlanhla Nciza Zinathi
John Israel A Send an email 19 May 2021
Back to top button
Close
We use cookies on our website to give you the most relevant experience by remembering your preferences and repeat visits. By clicking “Accept All”, you consent to the use of ALL the cookies. However, you may visit "Cookie Settings" to provide a controlled consent.
Cookie SettingsAccept All
Manage Privacy