The Major League DJz have bagged a BET Award nomination.

There they go again, taking Mzansi to the world. We must confess, the Major League DJz have made us so proud this year. The famous duo has recorded significant milestones since the beginning of the year.

Mzansi was thrilled to hear that they had signed an international record deal. We also loved it when they were featured as performers at Coachella. The duo announced again that their forthcoming project would feature collaborations with international artists. It has been one of their most successful years, and it isn’t even the end of the year.

The “Balcony Live Mix” stars have now been nominated for a BET Award. You read that right. The nominees were announced on June 1st. They are up for the Best International Act Award alongside Dave, Dinos, Fally Ipupa, Fireboy DML, Little Simz, Ludmilla, Tayc, and Tems. The event will be held on 27 June 2022 and will air live from the Microsoft Theater in Los Angeles. 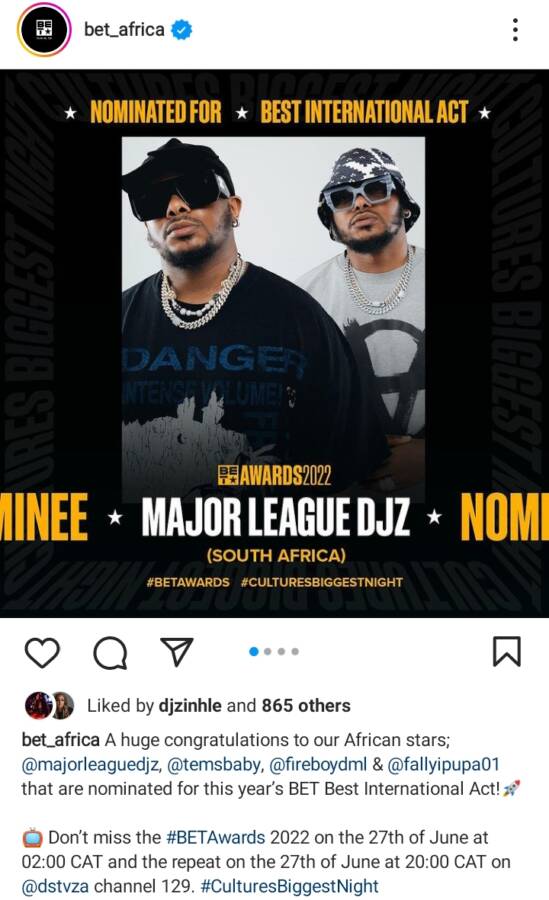 Tags
BET Award Major League DJz
John Jabulani Send an email 3 June 2022
Back to top button
Close
We use cookies on our website to give you the most relevant experience by remembering your preferences and repeat visits. By clicking “Accept All”, you consent to the use of ALL the cookies. However, you may visit "Cookie Settings" to provide a controlled consent.
Cookie SettingsAccept All
Manage Privacy