The NFT craze is catching up on Mzansi and we love what we’re seeing and can’t wait for more adoption going forward.

Mzansi boy band Major League DJz has joined the NFT revolution with the recent announcement of an upcoming NFT drop.

In a recent post to their Instagram page from Los Angeles in the United States, Major League had announced that their NFT would drop on February 22 – that’s exactly five days from now.

The NFT would give fans access to many goodies, including opportunities for meet and greet, access to exclusive events, etc. they encouraged fans to join their Discord to stay updated on their NFT journey. You can check out the post below 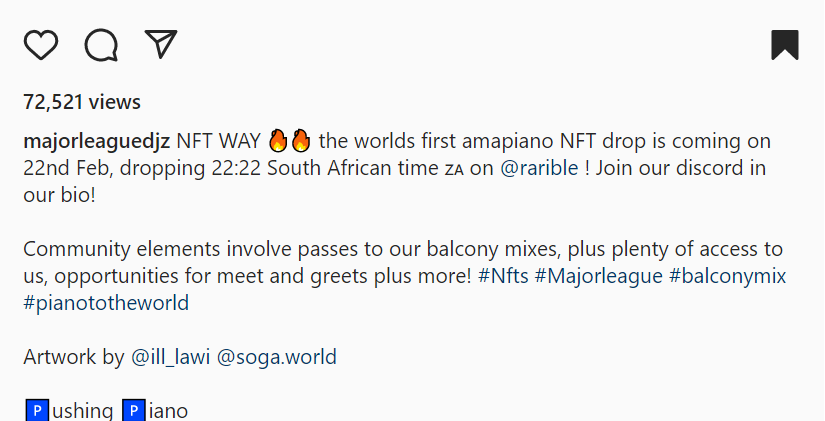 The imminent NFT drop would be a milestone for Major League DJz, a band made up of the twin brothers Bandile Mbere and Banele Mbere, in that they would be the first amapiano collective to drop an NFT project.

In other news, one of the brothers, Bandile, is set to become a father, his girlfriend Nomalanga Shozi having recently announced she’s carrying his first child.

Well, if you’re a fan of Major League DJz and the world of blockchain and tech, you may want to stay tuned for February 22.

Tags
Major League DJz
John Israel A17 February 2022
Back to top button
Close
We use cookies on our website to give you the most relevant experience by remembering your preferences and repeat visits. By clicking “Accept All”, you consent to the use of ALL the cookies. However, you may visit "Cookie Settings" to provide a controlled consent.
Cookie SettingsAccept All
Manage Privacy